SEOUL, April 11 (Yonhap) -- Ousted President Park Geun-hye will go through another round of questioning this week, prosecutors said Tuesday, as they prepare to wrap up the probe into a corruption scandal that brought her down.

Prosecutors will visit a detention center south of Seoul, where Park is incarcerated, on Wednesday morning for a fifth interrogation of the former president, they said.

Prosecutors have been interrogating Park at the detention house since she was arrested late last month over a string of allegations including bribery, abuse of power, coercion and leaking government secrets.

Wednesday's inquiry could be the last questioning of the country's former leader before prosecutors level formal charges against her.

Though prosecutors said they cannot confirm, legal experts say it is likely that they will indict Park before Monday, when the official campaign period for the May 9 presidential election begins. 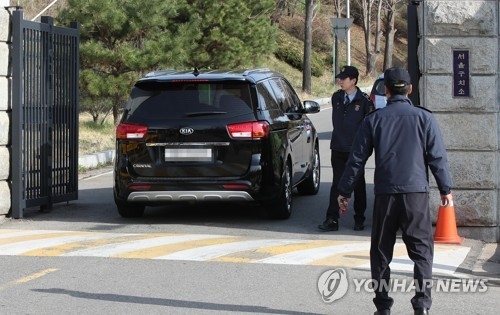 Park to be questioned at detention center Wednesday

Park to be questioned at detention center Wednesday