"We finished moving the Sewol into a dry dock at the port of Mokpo as of 3:58 p.m.," Lee Cheol-jo, the chief of the salvage operation, told reporters at a press conference. "We will first check the exterior condition of the hull tomorrow and go on cleaning and disinfecting it, and then carry out safety checks on the following day."

The search for the remains of the nine missing people that may still be inside the wreck will start early next week, he said.

The official said divers will keep looking for any remains that may be at the bottom of the sea where the ferry sank. Underwater fences surrounding the area have been set up to prevent any items from drifting away.

The ferry capsized in waters near Jindo Island, some 472 kilometers southwest of Seoul, on April 16, 2014, claiming the lives of 304 people, most of whom were high school students on a school trip.

In order to recover the remains and conduct a detailed investigation into the disaster, the South Korean government decided to pull the ferry from the water intact in 2015, with the 85.1 billion won (US$72 million) project going to a Chinese consortium led by state-run Shanghai Salvage.

After months of preparation, the operation to raise the Sewol, lying about 40 meters under water, began on March 22. After the ferry was raised, it was loaded onto a semisubmersible transport ship, and arrived in port on March 31. Even after its arrival in Mokpo it took more than 10 days to move the ship to a dry dock, mainly because of its weight.

Over the three-week period, 20 animal bone fragments and some 100 items including a passport, bags and other personal belongings have been recovered from the wreck. 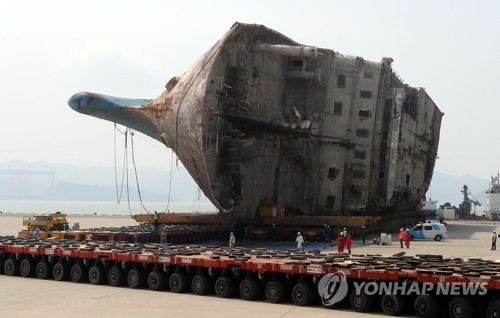