PAJU, South Korea, April 11 (Yonhap) -- South Korean national under-20 football team defender Jeong Tae-wook on Tuesday thanked his teammate for saving his life when he was knocked unconscious during a match last month.

Jeong fell to the ground unconscious while playing against Zambia in Cheonan, South Chungcheong Province, on March 27 at a FIFA U-20 World Cup test event. In the 80th minute, he and Zambian midfielder Kenneth Kalunga collided in the air when vying for the ball.

Realizing the seriousness of Jeong's condition, Lee Sang-min dashed to the player and dislodged his tongue from his airway before the medical staff's arrival. Lee then gave him artificial respiration so that Jeong could breathe again.

Jeong was later rushed in an ambulance to a local hospital and regained consciousness.

"After I regained consciousness, I was told by my teammates about the occurrence," Jeong said to reporters at the National Football Center in Paju, north of Seoul. "I haven't really said 'thank you' to Lee even after the incident, but I want to say it to him right now." 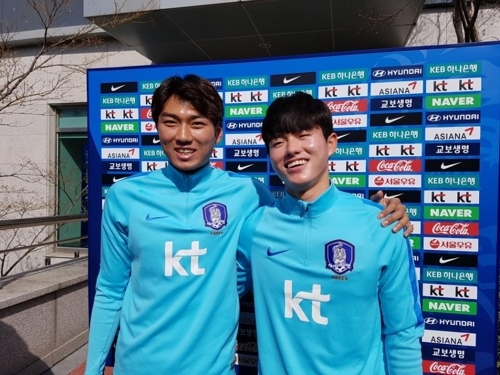 Lee, who was later honored by the South Korean Ministry of Health and Welfare for his rescue effort, said he knew Jeong's airway was blocked when he looked at the center back's face.

"He was in a really serious condition, so I only thought about dislodging his tongue," he said. "I hurt my finger because Jeong bit me while he was unconscious, but I'm okay right now."

A medical examination showed Jeong will have to sit out for at least six weeks since there's a small fracture in his neck. However, South Korean head coach Shin Tae-yong included Jeong in the 25-man roster for April training so that the 19-year-old could recover his fitness before the U-20 World Cup start. The FIFA competition will run from May 20 to June 11 in six South Korean cities.

When asked about trauma after the collision, Jeong said it's something he needs to overcome.

Jeong, who is with Ajou University's football club, said he and Lee are close friends as they are also now roommates. However, both are defenders and they will have to go through friendly competition to put their names on the final 21-man entry.

"After the incident, there's a strong bond on this team," he said. "We will have to compete with each other, but I hope both of us can be on the final list. I want to play at the U-20 World Cup together with him." 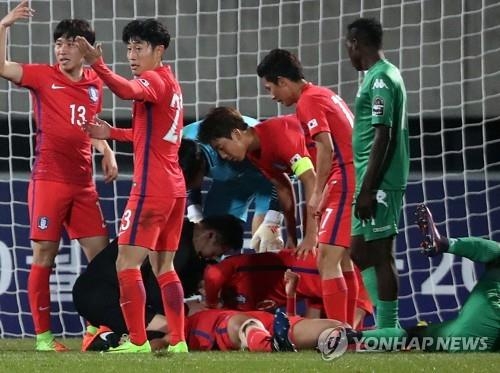 Injured U-20 defender thanks teammate for saving his life

Injured U-20 defender thanks teammate for saving his life