"The United States is talking about a preemptive strike as one of the available options, but I do not believe it will actually happen," Moon said in a press conference in Ulsan, 410 kilometers southeast of Seoul.

The U.S. has said all options are on the table in dealing with the communist state amid concerns about the North's imminent nuclear test and missile launch.

The presidential front-runner insisted the U.S. was only trying to bring Pyongyang back to the dialogue table.

"However, it could lead to an undesirable and unfortunate outcome should such talk of conflict be repeated and the United States and China's show of force continue," he said. 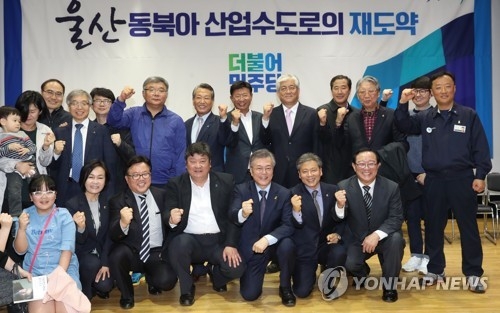 Moon's remarks came after the U.S. sent a nuclear-powered air craft carrier, USS Carl Vinson, to waters near the Korean Peninsula in an apparent warning against North Korea over its possible nuclear test.

"No matter what decision the United States makes, we own issues that are related to the Korean Peninsula, and we are the concerned party in the North Korean nuclear issue," Moon told the press briefing.

"No matter what decision the United States makes, it must first thoroughly discuss its move with South Korea in advance," he added.

South and North Koreas remain technically at war as the 1950-53 Korean War ended with an armistice agreement, not a peace treaty.

Moon, often said to be soft to the North, earlier said he will work to prevent a war on the peninsula with everything he has.

He has also warned Pyongyang that its direct military provocation against the South will mean the very end of its "existence."