Kim Ki-sung scored the championship-clinching goal on a power play to lift Anyang past Sakhalin 3-2 for the Asia League Ice Hockey championship, as the home team completed a three-game sweep of the best-of-five final at Anyang Ice Arena in Anyang, Gyeonggi Province. Anyang also beat Sakhalin for the championship last year.

It was Anyang's fourth title overall, but the team got to celebrate a championship on home ice for the first time Tuesday.

After winning the first two games by 6-2 and then 4-0, Anyang took the lead at 1:44 in the first period on a goal by defenseman Eric Regan.

Sakhalin tied the score some eight minutes later with Timofey Shishkanov's goal, but Shin Sang-hoon put Anyang ahead again with a power-play marker at 1:47 in the second period.

Sakhalin, with its back against the wall, knotted the score at 2-2 with its own power-play goal, with Ruslan Bernikov getting on the board.

Anyang earned a power play at about two minutes into overtime and caught a lucky break. Kim tried to center the puck from the right wing but the puck went off the skate of defenseman Sergei Ilin and floated into the net.

Anyang goalie Matt Dalton made 35 saves in the dramatic win. 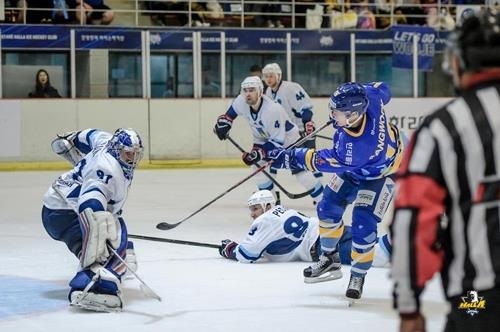