WASHINGTON, April 11 (Yonhap) -- U.S. President Donald Trump has put North Korea "clearly on notice," and if he decides to take action, it will be "decisive and proportional" as seen in the U.S. airstrikes on Syria, the White House warned Tuesday.

White House press secretary Sean Spicer made the remark, referring to Trump's tweet earlier in the day that the U.S. will solve the problem of North Korea on its own unless China helps with it. Trump also said the North is "looking for trouble."

"I think he has been very clear that he will not tolerate some of those actions by North Korea," Spicer said at a regular briefing, declining to elaborate how Trump plans to solve the problem on his own without Chinese help.

"The president is not one who's going to go out there and telegraph his response. I think he keeps all options on the table, he keeps his cards close to the vest. And as he showed last week with respect to Syria, when the president's willing to act, it's going to be decisive and proportional to make it very clear what the position of the United States is," Spicer said.

Spicer also said Trump has made clear that the North's behavior and actions with respect to the missile launches are "not tolerable."

"The last thing we want to see is a nuclear North Korea that threatens the coast of the United States or, for that matter, you know, any other country and any other set of human beings. So we need stability in that region and I think he has put them clearly on notice," he said. 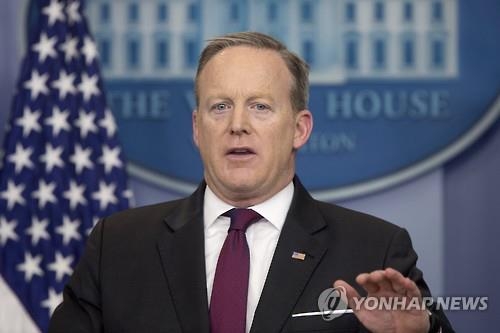 Tensions on the peninsula have risen amid speculation that North Korea may conduct its sixth nuclear test or carry out a threatened test of an intercontinental ballistic missile capable of reaching the U.S. around its key anniversaries in April.

In Tuesday's tweets, Trump also said that he told Chinese President Xi Jinping that "a trade deal with the U.S. will be far better for them if they solve the North Korean problem."