SEOUL, April 12 (Yonhap) -- Samsung Electronics Co. regained the top status in the global smartphone market in the first quarter of the year, even before the release of its latest Galaxy S8, largely thanks to an increase in shipments of mid- and low-end devices, data showed Wednesday.

According to the data compiled by industry tracker TrendForce, Samsung produced 80.1 million units of smartphones in the January-March period to account for 26.1 percent of the global smartphone market.

Its U.S. archrival Apple Inc. came in second with a 16.9 percent share.

The latest figure marks a turnaround from the October-December period of 2016, when Apple accounted for 20.3 percent of the world's smartphone market to stand as the No. 1 player.

Samsung, struck by the suspension of the Galaxy Note 7 phablet, managed to take up 18.5 percent of the market in the fourth quarter of last year.

Over the first quarter of this year, the world's production of smartphones reached 37 million units, down 23 percent from a three-month period earlier. TrendForce attributed the decline to the lackluster production of Chinese manufacturers.

The researcher said the demand for smartphones is anticipated to remain sluggish over the second quarter, as many consumers are waiting for the release of a new iPhone by Apple in the third quarter.

The data also came as Samsung is set to release the Galaxy S8 smartphones this month, seeking to rebuild its tainted brand reputation.

Preorders for its new flagship smartphone have surpassed a whopping 600,000 units in just five days here, heralding a big hit for the company.

The Galaxy S8 smartphones feature high-resolution displays that bend on both ends, and come with various innovative technologies, such as iris and face recognition scanners, as well as a smart voice assistance program named Bixby. 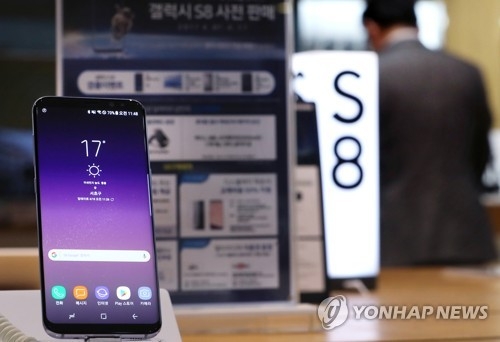