The unemployment rate in Asia's fourth-largest economy stood at 4.2 percent last month, edging down 0.1 percentage point from the same month last year, according to the data compiled by Statistics Korea.

From a month earlier, the rate fell 0.8 percentage point from a seven-year high of 5 percent.

The unemployment rate for young people, aged between 15 and 29, marked 11.3 percent last month, down from 11.8 percent tallied a year earlier and from February's 12.3 percent.

The employment rate for last month rose to 60.2 percent, recording a 20-year high for all March figures.

The statistics agency said the sharp rise in monthly employment is led by the construction, and retail and wholesale businesses, which created 164,000 and 116,000 new jobs, respectively, last month.

The number of new jobs offered by manufacturing businesses fell by 83,000 in March from a year earlier, slowing down from 92,000 in February and 160,000 in January.

"Recent economic data are favorable, especially in the production side, amid an apparent economic recovery," said Bin Hyun-joon, head of the agency's employment statistics division. "Rising exports, which are closely linked with the manufacturing sector, also contributed to the good figure."

The sluggish performance of the manufacturing sector, which accounts for one-fifth of the country's total hiring, has created a drag on the local job market for years.

Local manufacturers newly hired around 150,000 people every month throughout 2015, with the number peaking at 191,000 in October of that year.

But the figure plunged to 20,000 in June last year and posted negative growth the following month for the first time in 49 months as the country had struggled with faltering exports for nearly two years.

In recent months, however, the South Korean economy seems to have entered an upside cycle as its exports, the key economic driver, posted a fifth-consecutive month of growth since November last year on the back of rising global trade.

Industrial output of the manufacturing sector jumped 6.6 percent in February from a year earlier on a rise in machinery and cars, with facility investment soaring 19.5 percent on-year in February. 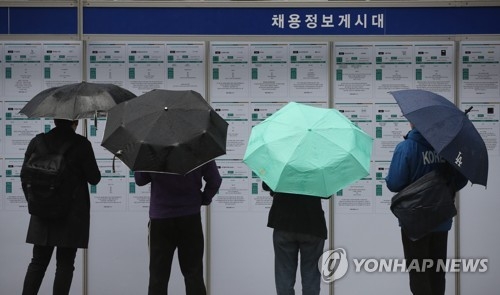 The finance ministry said that the improved business atmosphere improved the local job market in the first three months of the year.

"Thanks to a turnaround in the number of new hires, the job market for the first quarter is in a better-than-expected condition," the ministry said in a release. "But we still face some downside risks at home and abroad, such as the possible impact of the on-going corporate restructuring."

It said the government will push forward with economy-boosting measures to keep the recovery momentum alive further.