SEOUL, April 12 (Yonhap) -- More than 650 bio companies from both home and abroad showcased their latest technologies and products at an international convention in Seoul on Wednesday.

The 2017 Bio Korea International Convention kicked off at the Convention and Exhibition Center (COEX) in southern Seoul for a three-day run. The annual event, the 12th of its kind, is hosted by the Ministry of Health and Welfare.

The ministry said the goal of the gathering is to navigate the future of the global health care industry that is largely seen as the next growth engine.

"The event will serve as an opportunity for the local bio industry to make the next leap forward," said Lee Yeong-chan, chief of the Korea Health Industry Development Institute.

The convention includes bio-tech exhibitions, business forums attended by experts and academics, as well as a job fair.

At an exhibition hall, more than 550 booths were set up by the companies to promote their advanced medical supplies and equipment, hoping to grab the attention of international buyers and visitors.

Among the participating companies are leading global pharmaceutical and biohealth companies, including GE Healthcare and Johnson & Johnson Medical.

"The convention aims to increase the exchange of technology in the bio industry and to maximize investment," said a ministry official, who asked not to be named. "Visitors will be able to witness the global trend of the biohealth sector and the fourth industrial revolution this year."

"The government is doing its utmost to make the bioehealth industry that includes drugs, cosmetics and medical supplies into a new growth engine for the company," Acting President and Prime Minister Hwang Kyo-ahn said.

In recent years, local bio companies have become more competitive on the global stage on the back of robust R&D spending and policy assistance provided by the government.

Hwang also underscored that the country will capitalize on its cutting-edge medical technologies to help develop the world's health industry. 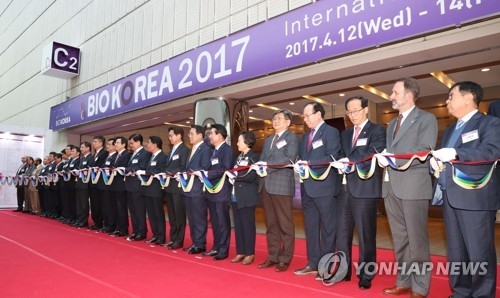