SEOUL, April 12 (Yonhap) -- Presidential front-runner Moon Jae-in continues to pledge and claim his commitment to the security of the nation, while in reality he wishes to prove his loyalty to the country and not North Korea, observers here noted Wednesday.

The presidential candidate of the largest Democratic Party has faced a series of attacks and accusations from conservative and liberal opponents alike, and observers said one such accusation he apparently wishes to get rid of the most is that he is pro-North Korea.

It was not the first time the former opposition leader has been called pro-North Korea in his 15-year political career. His earlier efforts to prove his innocence even included his controversial boasting of a military citation he was given decades ago by his then commander Chun Doo-hwan, who later staged a military coup to become president.

The revelation, apparently aimed at proving his previous and current commitment to the country's security, backfired even among his die-hard followers as Chun has been convicted of ordering a bloody crackdown on a 1979 democratic uprising in Gwangju, the traditional powerbase of Moon's liberal party.

And when the elected head of a small district office in Seoul again accused him of being a "commie," Moon reacted quickly and angrily with a formal complaint, leading to a police investigation into the district office head this week.

Such a reaction, observers note, showed the presidential candidate is aware how explosive the issue can be in South Korean politics, especially in an election year.

South Korea and North Korea remain divided and are technically at war with each other as the 1950-53 Korean War ended only with an armistice agreement, not a peace treaty. 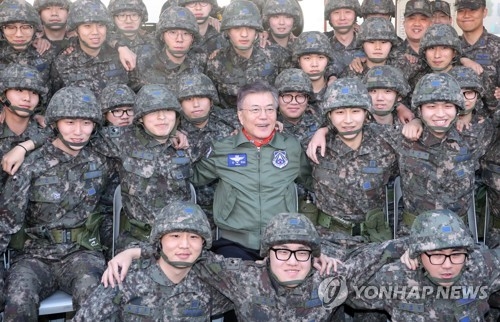 Moon also could not afford to waste any time as Ahn Cheol-soo, the runner-up in opinion polls on the May 9 election, is now only few points away.

Some of the most recent surveys have also placed the candidate from the center-left People's Party ahead of Moon.

In a survey conducted by the Korea Research Center and released Sunday, Ahn posted an approval rating of 36.8 percent in a hypothetical five-way race, beating Moon at 32.7 percent.

With less than four weeks left until the election, Ahn and others are persistently, and quite cleverly, attacking the front-runner's weakest link, the observers noted.

Hong Joon-pyo, the presidential candidate of the conservative Liberty Korea Party, argued the United States may attack North Korea without even telling Seoul in advance should Moon or any other liberal candidate be elected.

"If a leftist regime comes into office here, would the U.S. let our government know before preemptively striking North Korea when (the leftist government here) will tell North Korea?" Hong said Tuesday, accusing both Moon and Ahn of being "advocates" of the communist North.

Hong's persistent and renewed accusation apparently seeks to exploit the recent tension around the Korean Peninsula sparked by reports of a possibly imminent nuclear test by Pyongyang, the observers note.

Washington quickly announced its dispatch of a nuclear-powered aircraft carrier, the USS Carl Vinson, to the area, prompting concerns and even suspicions over a possible attempt to preemptively strike the reclusive North.

Moon, apparently on his toes, voiced a strong warning against Pyongyang, saying a North Korea-initiated armed conflict will cost its very existence.

"I will prevent a war on the Korean Peninsula with everything I have," he said Monday, the same day Washington said it was redirecting the Carl Vinson Strike Group to the region from its original destination in Australia.

The liberal candidate has also done an about-face on the ongoing deployment of U.S. missile defense system, the Terminal High Altitude Area Defense (THAAD), whose fate, he earlier said, must be decided by the new, incoming administration.

"We must look squarely at the fact that THAAD deployment will be inevitable should North Korea continue its nuclear provocations," Moon said Tuesday.

"Should a war ever break out again on the Korean Peninsula, I will be the first to grab a weapon to fight for the lives of our people and the safety of our nation," he added.

Moon struggles to prove allegiance to South, not North

Moon struggles to prove allegiance to South, not North