They gave pep talks to the participating soldiers.

"The outcome of a war is up to sustainable support for military operations," Lee was quoted as saying. 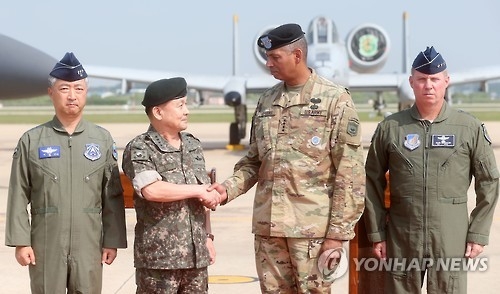 The two sides kicked off their largest-ever joint logistics maneuvering training Monday, involving nearly 1,200 South Korean troops and around 2,500 American soldiers, including those from the U.S. and other bases in the Asia-Pacific region. It is to run through April 21.

The exercise is being held amid growing concern about North Korea's additional provocation and the Trump administration's strong warning messages.

"This exercise is yet another example of our ability to flawlessly execute expeditionary logistics capabilities that can be employed worldwide during humanitarian assistance and disaster relief operations, contingencies or crisis response," Brig. Gen. Michel Russell, assistant chief of staff for logistics at the U.S. Forces Korea, was quoted as saying. 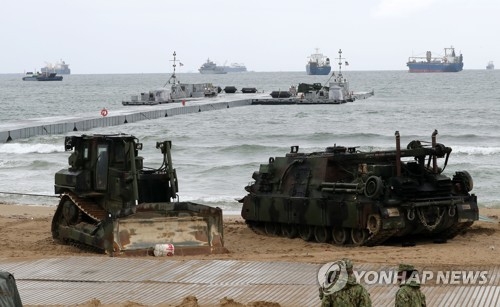 Named Operation Pacific Reach Exercise 2017, the biennial training is aimed at improving the interoperability of the allies' forces on the employment and operation of various logistic processes.

"It's an exercise based on realistic tactical requirements and missions expected of the ROK (South Korea)-U.S. combined and joint forces," said PACOM. "While not directed toward a current situation or crisis, each training event has a unique tactical scenario aimed at improving readiness." 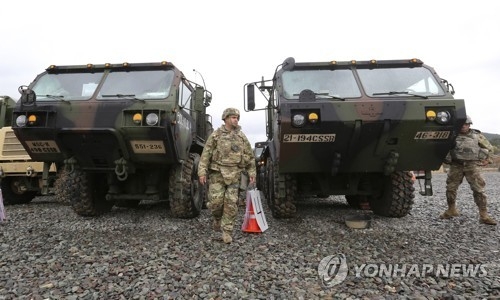 Military tensions have mounted in Korea in recent weeks. The U.S. Carl Vinson Strike Group, led by a nuclear-powered aircraft carrier, is on its way to waters close to Korea in response to the North's continued provocation.

The communist nation responded with a typical threat, saying it would take "tough counteraction."

"We never beg for peace but we will take the toughest counteraction against the provocateurs in order to defend ourselves by powerful force of arms and keep to the road chosen by ourselves," a foreign ministry spokesman told Pyongyang's official news agency KCNA.

U.S. President Donald Trump said in a tweet that the North is "looking for trouble." He reaffirmed his administration's plan to resolve the North Korea problem on its own if China refuses to cooperate. The U.S. said it would take a "decisive and proportional" response to the North's military move.