South Korea won the Asian Football Confederation (AFC) Women's Asian Cup Group B qualifying tournament Tuesday, thanks to a 4-0 win over Uzbekistan in Pyongyang. South Korea and North Korea finished tied at 10 points with identical records of three wins and a draw, but the South had a better goal difference, plus-20 to plus-17.

The 2018 AFC Women's Asian Cup in Jordan will also double as the regional qualification for the 2019 FIFA Women's World Cup in France. The top-five teams among eight nations at the Asian tournament will punch their tickets to the women's showpiece event. South Korea have played at the 2003 and 2015 Women's World Cups. 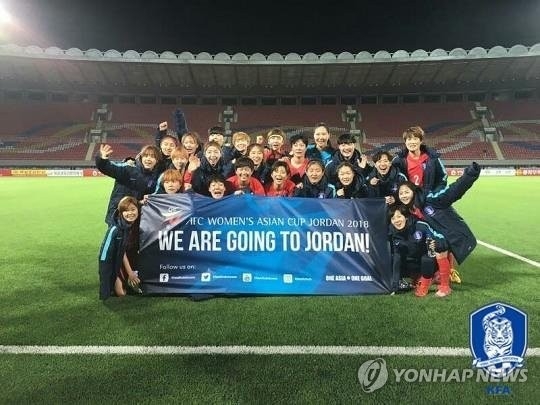 In an interview posted on the AFC's website Wednesday, Yoon said there is still much work left to be done.

"We are delighted to have qualified," he said. "But of course, the work starts here, as we hope to qualify for the World Cup in France."

South Korea beat up on Uzbekistan, Hong Kong and India in Pyongyang, but the 1-1 draw against North Korea last Friday turned out to be their most critical result. South Korea needed a second-half equalizer at Kim Il-sung Stadium to manage the draw, where a loss would have knocked them out of contention. South Korea have beaten North Korea just once in 18 meetings, with three draws and 14 losses.

It was a historic occasion on many levels, as the Koreas, still technically at war, had never had a competitive football match north of the border. Yoon said his players deserved "full credit" for overcoming challenges on and off the field.

"When we were drawn to play here in Pyongyang, we always knew it was going to be tough because we have never played here before," he added. "But as soon as we tied (North Korea), I had every faith that we would qualify."

Yoon and his team will return to Seoul via Beijing early Thursday.