SEOUL, April 12 (Yonhap) -- Police on Wednesday questioned the leader of a local fan club of former President Park Geun-hye over a violent street rally protesting against the Constitutional Court's decision to remove her from office last month.

Chung Kwang-yong, chief of "Parksamo" -- meaning a group of people who love Park Geun-hye in Korean -- appeared at the Jongno Police Station in Seoul at around 9 a.m. to undergo questioning for allegedly orchestrating the violent demonstration on March 10. 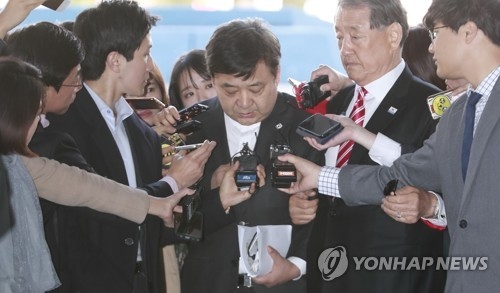 The pro-Park protest turned violent after the ruling, with some participants using makeshift weapons against police who barred them from approaching the court. Three people died after they were injured or collapsed in the process.

Denying the allegations raised against him, Chung said the police are responsible for the casualties.

"The crowd was enraged and I guided them to stay calm and not to use violence," he said. "It was the police who used excessive force."

Meanwhile, prosecutors said they have indicted a 50-year-old participant at the rally for allegedly attacking reporters who were on duty.

The man, identified only by his last name Park, was also charged with damaging a camera and obstructing duty, prosecutors said.

Police are planning to lodge a suit against the rally organizers, seeking compensation for officers who were injured and the damage done to their property.

"We will certainly hold the organizers responsible for the damage incurred due to the illegal violent protest," a police official said. 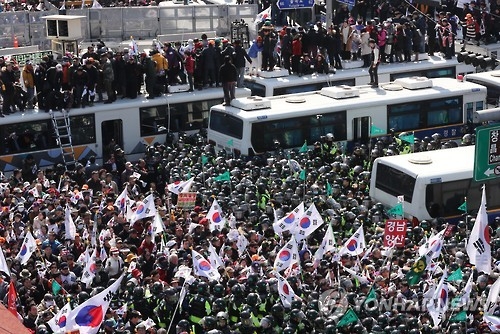