SEOUL, April 12 (Yonhap) -- Acting President and Prime Minister Hwang Kyo-ahn on Wednesday vowed to remove onerous regulations impeding the growth of the bio industry, reiterating the government's commitment to developing it into a future growth engine.

During the opening ceremony of an international forum on the bio industry, Hwang also underscored that the country will capitalize on its cutting-edge medical technologies to help develop the world's health industry.

"The government will push to strengthen the global competitiveness (of the country's bio industry) by expanding investment to develop next-generation medicines and vaccines, and supporting the development of promising products," Hwang said during the opening ceremony of Bio Korea 2017 at COEX in southern Seoul.

"We will also strive to actively identify and boldly enhance regulations if they impede investment in this sector and get in the way of the industry's growth," he added.

South Korea's bio industry has seen steady growth with its exports reaching US$9.8 billion last year, up 19 percent from a year earlier, Hwang pointed out.

Under the comprehensive government strategy to boost the bio industry, Seoul has sought to bolster its investment into medical research, raise bio-technology experts and increase tax benefits for the industry, Hwang said.

Hosted by North Chungcheong Province and the state-run Korea Health Industry Development Institute, the 12th convention kicked off its three-day run on Wednesday. The convention, which brought together some 600 businesses from 40 countries, consists of bio-tech exhibitions, business forums and a job fair.

Hwang's acting presidency is set to end after the May 9 presidential election. 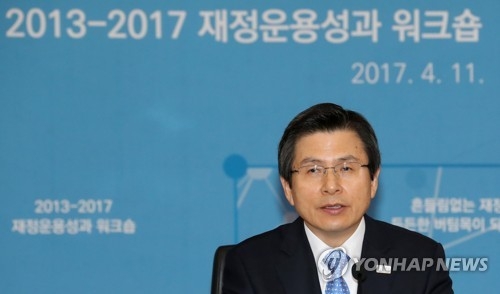