PYEONGTAEK, South Korea, April 12 (Yonhap) -- The shopping mall in front of Osan Air Base in Pyeongtaek will be renovated by early next year to attract more foreign tourists, as well as U.S. servicemen, the city government said Wednesday.

U.S. Forces Korea (USFK) headquarters and the Eighth United States Army, both in Yongsan, central Seoul, and the 2nd Infantry Division in northern Gyeonggi Province are scheduled to be relocated to Camp Humphreys here by the end of next year.

"We are planning to renovate the shopping mall so it can be a special district of the city that can be easily frequented by foreign tourists, as well as U.S. servicemen," a municipal official said.

The city government will pour 5 billion won (US$4.3 million) into the renovation of old public facilities and repave the road in front of the main gate of the air base by March 2018, the official said.

The shopping mall will also have new indoor and outdoor lighting systems, gardens and an outdoor performance stage, he said. 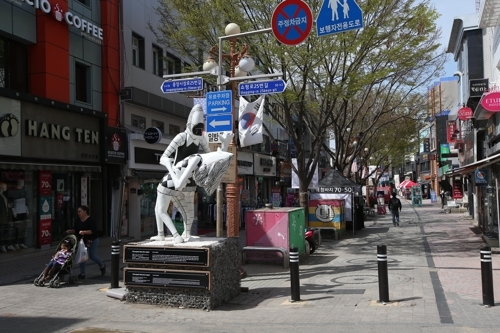 Shopping mall near Osan Air Base to be renovated: city gov't

Shopping mall near Osan Air Base to be renovated: city gov't