SEOUL, April 12 (Yonhap) -- President front-runner Moon Jae-in said Wednesday that he will double the rate of increase in the government's fiscal spending if elected, and redirect government spending to create more jobs and support corporate employees.

The presidential candidate of the liberal Democratic Party noted the country's fiscal spending was designed to increase by an annual average of 3.5 percent on-year under the current mid and long-term plans.

"I will actively expand the increase to an annual average of 7 percent," he said at a press conference on his economic policies.

Moon did not specify how much such an increase will amount to in additional spending, but said an additional 50 trillion won (US$43.54 billion) will come from a natural rise in tax revenues over a five-year period.

The additional money, along with a greater part of the existing budget, will go to the people instead of businesses, as they often did in under past administrations, he said. 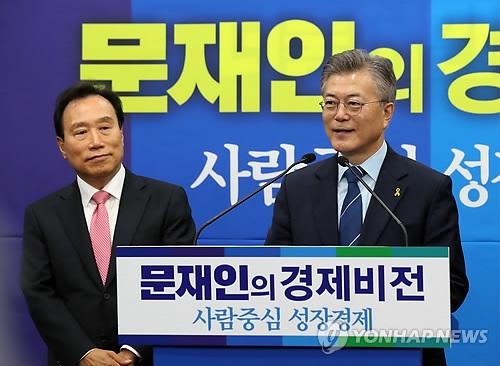 "Up until now, economic policies have centered on providing everything the country had to companies. We hoped such investment in companies would trickle down as benefits to workers and people," Moon said.

"But limits of such policies have been identified. I will change the order. I will change the economic structure to one centered on the people, in which the government will invest in people, who will then improve the competitiveness of companies and the country," he added.

Such efforts will include fresh and increased investment in 10 major areas that include the fourth industrial revolution and the social services sector.

The investment will help create more than 500,000 new jobs per year over the next five years, he insisted.

"Areas such as childcare, education, medical service, safety and environment have limits when only entrusted to the market. The government will actively support such areas to make sure all citizens will be provided with adequate services," he said.

To prevent companies, especially large conglomerates, from making excessive or unwarranted profits based on their market dominance or vast resources, Moon said he will work to enable class action through legal revisions while also reforming the state watchdog, the Fair Trade Commission.