SEOUL, April 12 (Yonhap) -- A senior Chinese diplomat on Wednesday held a second round of talks with South Korean politicians on the bilateral dispute over the deployment of a U.S. missile defense system here.

He arrived in Seoul Monday for a five-day visit amid growing signs of Pyongyang preparing new nuclear and missile tests. 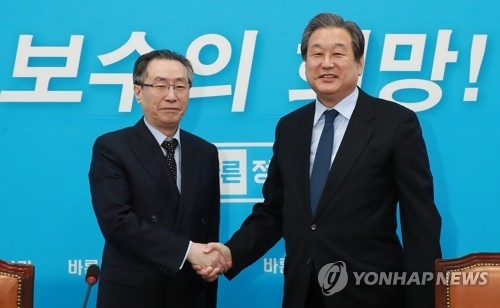 During the talks at the National Assembly, the two sides apparently repeated their positions on the deployment of the Terminal High Altitude Area Defense (THAAD) system, according to Kim, former leader of the Saenuri Party, which is now called Liberty Korea Party.

"The Chinese keep expressing their opposition to the THAAD deployment, but I said the THAAD issue is already a finished story. Its deployment has already begun, so I said it would be best not to talk about it anymore," the lawmaker said.

China claims the missile shield is a threat to its security while Seoul and Washington insist it is a defensive measure against Pyongyang's provocations.

He asked China to stop its apparent economic retaliation on South Korean firms like Lotte, saying it is not befitting of a large nation like China," Kim said.

Still, the two sides reaffirmed the importance of their countries' friendship and called for resolving the dispute at an early date, Kim said.

On Tuesday, Wu held a series of talks with South Korea's leading presidential contenders and their aides, including the Bareun Party's standard-bearer Yoo Seong-min and the Justice Party's Sim Sang-jeung. He is scheduled to meet with Hong Joon-pyo of the conservative Liberty Korea Party later Wednesday.