His moves came as security is emerging as a key issue for the May 9 election with North Korea seen preparing for another nuclear test and the United States sending an aircraft carrier strike group to the peninsula in an apparent show of force against the wayward regime. 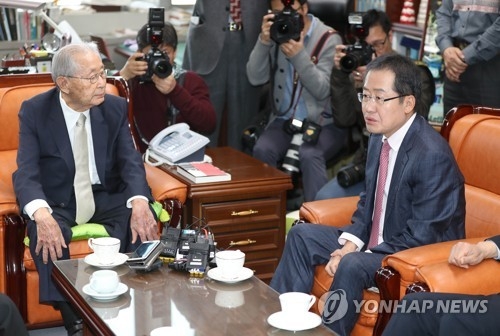 "Candidates Moon and Ahn have reversed their positions seemingly in favor of the deployment of a Terminal High Altitude Area Defense (THAAD) system ... this makes me wonder whether they are qualified to be president, a post in charge of safeguarding the lives and safety of citizens," he said in his Facebook message.

"How could citizens possibly trust these people who reverse their positions on such an important national issue just to attract voters? People should vote for Hong Joon-pyo so that we can defend the Republic of Korea," he added.

On Tuesday, Moon said that he could support the ongoing installation of THAAD should Pyongyang carry out a sixth nuclear test or continue to destabilize the peninsula with unwarranted provocations. Moon said previously that the deployment of THAAD must be postponed to allow the next government to decide on the issue.

On the same day, Ahn said he would seek to alter his party's stance in favor of THAAD. Ahn has passively consented to the deployment, saying it is difficult to unilaterally reverse the Seoul-Washington accord on THAAD.

Hong's stepped-up offensive against Moon and Ahn came as he was striving to pick up momentum for his anemic campaign with his support ratings boxed in single digits. The two liberal rivals are seen in a neck-and-neck race with their support at more than 30 percent each.

Struggling to boost his election prospects, Hong has called himself a "strongman" and underscored that only a conservative leader can deal with escalating nuclear and missile threats from the unruly regime.

During a forum earlier in the day, Hong reiterated his election pledge to have Washington redeploy its tactical nuclear weapons to South Korea and build a marine special warfare command to prevail over the North's special forces.

"I believe now is the era when we have to pursue peace through (heavier) armaments based on power superiority rather than power parity," he said.

Later in the day, Hong met with Paik Sun-yup, South Korea's first four-star general who led Korean forces during the 1950-53 Korean War in yet another move to drum up conservative support.

He also met with Wu Dawei, a visiting Chinese diplomat in charge of negotiations on Pyongyang's denuclearization.