SEOUL, April 12 (Yonhap) -- The presidential candidates of five political parties here are set to meet in a televised debate this week, the first of at least six such meetings in the lead up to the presidential election, their party officials said Wednesday.

The five presidential hopefuls are set to hold their first joint TV debate on Thursday.

They include Moon Jae-in of the liberal Democratic Party, the front-runner in most recent polls on the May 9 presidential election. The rest are Rep. Ahn Cheol-soo of the center-left People's Party, Hong Joon-pyo of the former ruling Liberty Korea Party, Rep. Yoo Seong-min of the conservative Bareun Party and Rep. Sim Sang-jung of the progressive Justice Party. 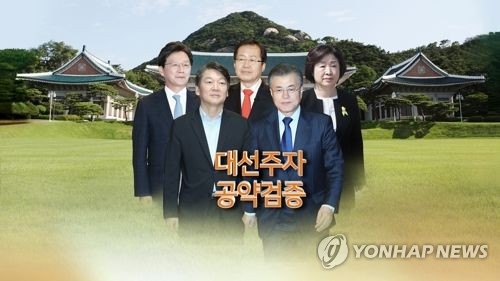 Thursday's TV debate will be jointly hosted by local broadcaster SBS and the Journalists Association of Korea.

It will mark the first debate involving all five presidential candidates of the political parties. At least five more nationally televised debates are scheduled, including one to be hosted and televised by another local broadcaster KBS next Wednesday. The national election watchdog also plans to hold three TV debates on April 23, 28 and May 2.

The race for the country's top elected post is currently viewed as a duel between two front-runners, Moon of the Democratic Party and Ahn of the People's Party. The two have together garnered more than 80 percent of votes in most recent polls on the upcoming election.

The election is believed to be tilted in favor of the liberal faction as it follows the March 10 ouster of former President Park Geun-hye over a massive corruption scandal that has also led to her arrest.

Still, Yoo of the conservative Bareun Party, which splintered from the former ruling party in the wake of the corruption scandal, said he will finish the race, claiming the recent opinion polls have been distorted.

"The public sentiment I have personally seen is quite different from what the numbers in opinion polls say. I will finish the race," he said earlier.