SEJONG, April 12 (Yonhap) -- The South Korean government said Wednesday that it will deal with mounting household debt in a stable way through strengthening risk management capabilities, as the debt delivers a blow to Asia's fourth-largest economy amid higher interest rates.

"The issue of household debt is closely linked with the finance sector and the real economy," said Acting President Hwang Kyo-ahn in a meeting in Seoul with the heads of government agencies including the Ministry of Strategy and Finance and the Financial Services Commission. "The government will manage the risk through a fundamental approach to improve the income of individual families and adopt better lending practices."

South Korea's household debt has been on the rise in recent years as people borrowed money from banks and other financial companies to buy homes, cover living costs and invest in real estate and businesses.

South Korea's outstanding household credit -- which is composed of household loans and credit card spending -- came to 1,344.3 trillion won (US$1.19 trillion) at the end of 2016, up 11.7 percent from a year earlier.

As increased household debt has weighed on domestic consumption and posed a threat to lenders during rate hikes, the government has been trying to slow down the pace of growth and reduce the amount.

The authorities have had local financial institutions tighten loan screening procedures and expand amortized lending, making borrowers pay back both principal and interest at the same time. 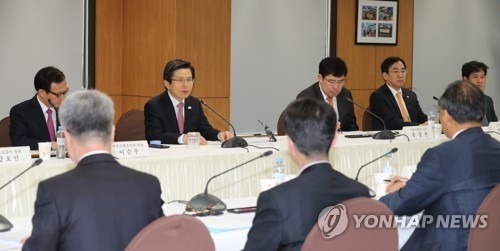