In North Korea, painting such posters did not require artistic creativity much as he followed instructions by the ruling Workers' Party of Korea in a country where artwork is used for propaganda campaigns for the leadership.

"I was not an artist in North Korea as I drew what I was ordered," the 39-year-old painter said in a recent interview with Yonhap News Agency. "I did not have an experience of doing soul searching in the North."

Oh is among a handful of North Korean defector-painters who are seeking to portray their experience on both sides of the tense inter-Korean border and thoughts about the North Korean regime. 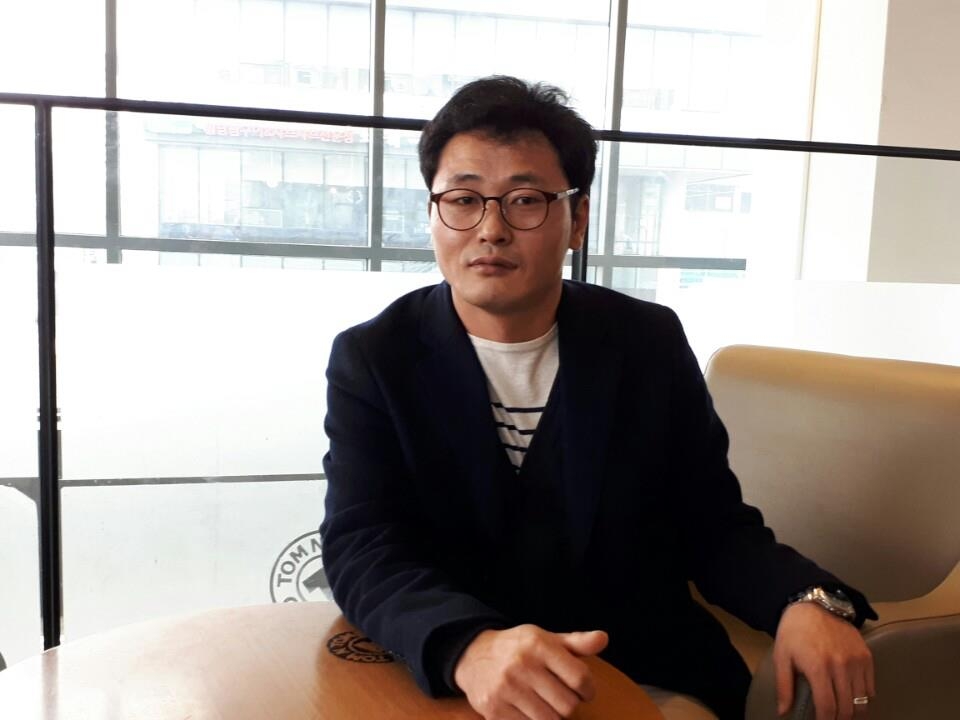 He said in North Korea, he did not have the luxury of thinking about what his dream would be, never realizing that drawing pictures would become his life-long mission for soul searching.

Strong aspiration for painting came at the height of hardship when he had to live in a dim basement at a South Korean consulate in China while awaiting a flight to Seoul for three years after escaping North Korea. He came to South Korea in 2012.

"I would have died if I had not drawn pictures at that time," Oh said. "I did not belong to any of the two Koreas. My biggest wish was to walk on grass (freely) back then."

The two Koreas have technically remained in a state of war since the 1950-53 Korean War ended in a truce, not a peace treaty.

In South Korea, Oh is working as a painter after studying fine arts in Hannam University in Daejeon, some 164 kilometers south of Seoul. But life as an artist here is not as easy as he previously expected, he said.

"I had the experience of being hurt in South and North Korea. I would like to ask questions to people about how wounds could be healed through my work," he said.

His quest for what life should be is illustrated as an image of spoon in his artwork. A spoon is the main tool needed to feed oneself, symbolizing human beings' basic desire, he says.

Depending on what is being placed on the spoon, values which an individual puts priority on differ, he added. A crooked spoon means people's greed for power and money. 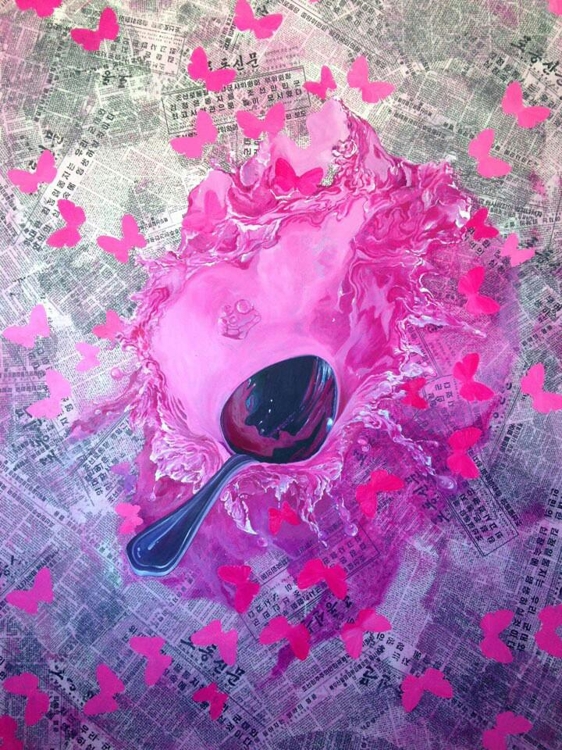 "Where does human beings' desire come from? I think that how desire is expressed boils down to a matter of making a living," he said.

Oh's work "Throw and Ask" shows a spoon on top of a collection of images of the Rodong Sinmun, North Korea's main newspaper. Pink butterflies coming out of the spoon represent hope and ideals.

"Rodong Sinmun epitomizes the tyranny of North Korea. But I think ideology and the political system pale in comparison to the issue of bread and butter," he said. "People would say they seek happiness and freedom when asked about their ideal values."

Oh said that he would like to send a message of co-existence through paintings at a time when internal division and discord are also running deep in South Korea.

"Drawing propaganda posters speaks for North Korea's leadership. Here, I don't want to repeat such a job that aims to represent a certain group," he said. "I would like to talk about co-existence by excluding ideology and the political spectrum." 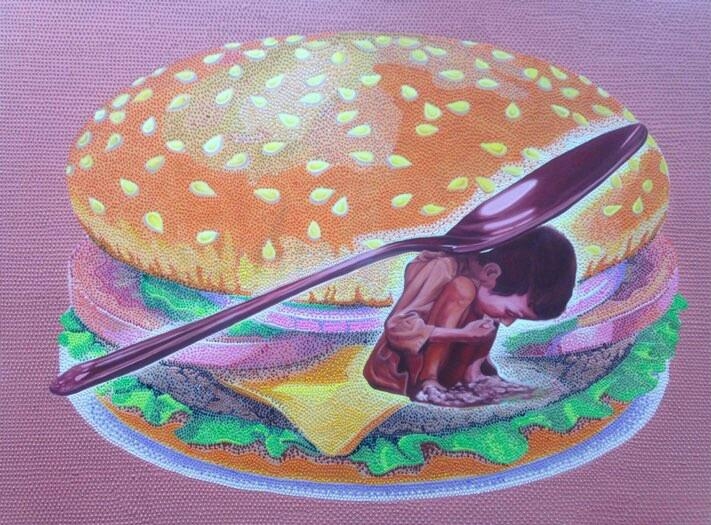 Touching on inter-Korean unification, he called for efforts to embrace North Korean defectors as members of society.

"There is no sincere discussion about how North Korean defectors see South Korean society," he said. "The two Koreas should be unified someday. I believe more South Koreans could accept them as main players for unification."

The artist said he rejected an "assigned" identity of being a North Korean defector, expressing hope that his works could be recognized as they are without the social stigma of defector being attached.

"I think that drawing pictures is a process of healing my wounds," he said. "I would like to throw questions to people to encourage them to think about what values they should pursue." 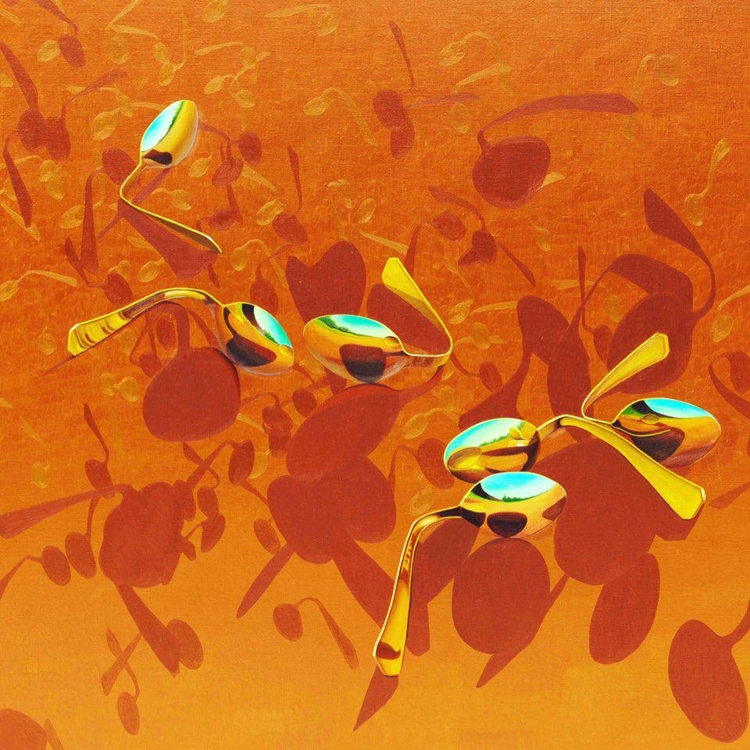 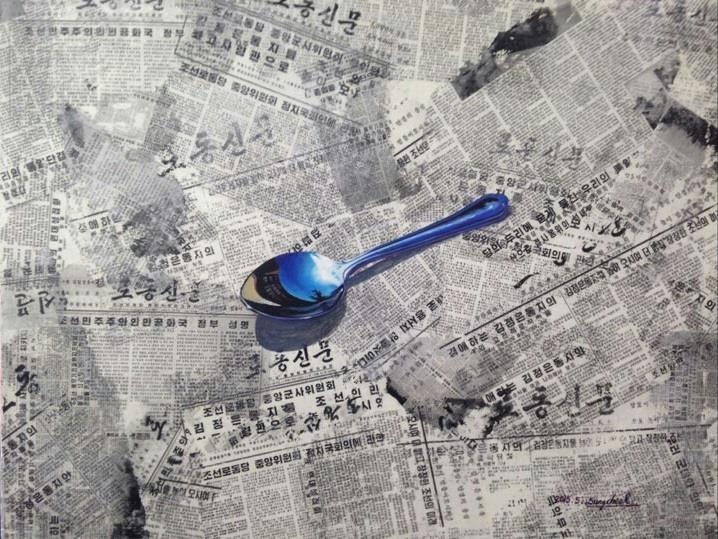