South Korea and North Korea finished tied at 10 points with the identical records of three wins and a draw. The South, however, had a better goal difference, plus-20 to plus-17, and claimed the top spot in Group B.

As the winner of the qualifying event, only South Korea will compete at the 2018 Asian Cup in Jordan, which also doubles as the regional qualification for the 2019 FIFA Women's World Cup in France. The top-five teams among eight nations at the Asian tournament will punch their tickets to the women's showpiece event. South Korea have played at the 2003 and 2015 Women's World Cups.

"From adjusting to artificial football turf to coping with North Koreans' avid support (for their players), we were well-prepared for the competition," Yoon told reporters at Gimpo International Airport in Seoul. "Our players had a big desire to play at the World Cup and that led us to a good result."

Yoon said he is proud of his players for overcoming a difficult environment and grabbing the ticket to the continental football tournament over North Korea.

"We've spent a lot of time together and I am happy that our players have been growing," he said. "We understand each other well and the players have followed my orders without trouble. They really deserve credit."

The 56-year-old coach added his side will reorganize and will work harder to get good results at the Asian Cup. Yoon added he will search for new players in the WK League, the South Korean women's football league that kicks off its new season on Friday.

"From tomorrow, I will visit football stadiums to find new players," he said. "Since we returned home with a ticket (for the Asian Cup), I'm sure we can prepare well for the upcoming tournament with confidence." 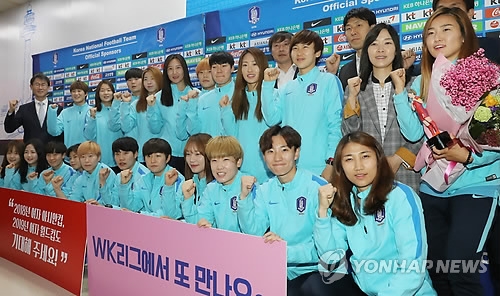 Yoon's squad landed in Seoul via Beijing after staying in the North Korean capital for 10 days for the football competition.

Any trip to the North requires the South's approval, as well as the North's consent, as the two Koreas technically remain in a state of war since the 1950-53 Korean War ended in a truce, not a peace treaty. The Seoul government last month gave the green light to the football team's visit to Pyongyang after the North assured the safety of the South Koreans via the AFC.