SEOUL, April 12 (Yonhap) -- Over 2 million propaganda leaflets praising North Korea and its communist regime were found in South Korea over about a 12-month period until early this year, government data showed Wednesday.

According to the Ministry of National Defense, the South Korean military has collected a total of 2,039,898 North Korean leaflets, mostly in Seoul and neighboring Gyeonggi Province, from January 2016 to February this year. 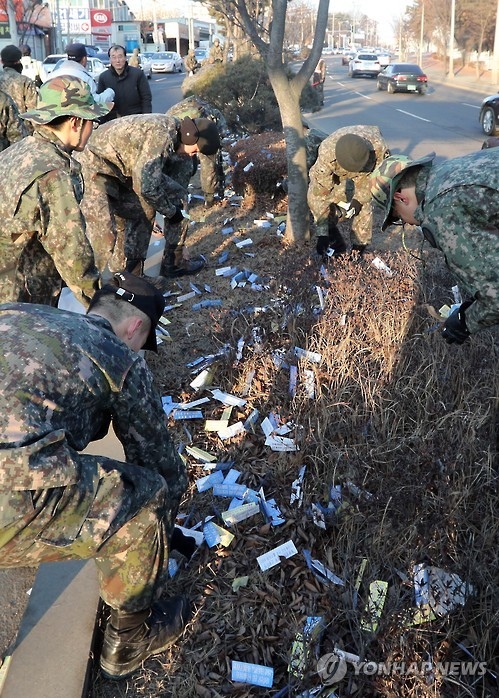 Pro-Pyongyang leaflets were collected on 269 days, or 65 percent of all days, during the period, the ministry said. The number of leaflets peaked at 351,809 in January and hit a low of 883 last July, it added.

North Korea began sending heaps of propaganda leaflets across the border in the middle of January last year, when Seoul resumed cross-border propaganda broadcasts in response to the North's nuclear weapons test.

The ministry said 85 percent of the North's leaflets were found in the Seoul metropolitan area, including Gyeonggi Province and Incheon, whereas not a single one was reported in the southwest provinces of Jeolla or on Jeju Island during the period.

In late March, about 6,000 leaflets glorifying North Korean leader Kim Jong-un were found in Incheon, west of Seoul, while another 150 criticizing an annual joint military exercise between South Korea and the United States were reported in the same port city.

"Thanks to northwesterly winds, the North's leaflets flew as far south as the Gyeongsang provinces," said a military official.

"All the leaflets were incinerated instead of being analyzed by military units," said the official.

Over 2 million N. Korean leaflets collected in S. Korea over past year

Over 2 million N. Korean leaflets collected in S. Korea over past year