A special parliamentary panel on the revision invited leading presidential candidates, including Moon Jae-in of the liberal Democratic Party and Ahn Cheol-soo of the center-left People's Party, to listen to their views on altering the basic law last amended in 1987.

He also proposed that the next presidential election be held in tandem with the local gubernatorial and mayoral elections in 2022, and that from that year on, two, four-year presidential terms begin.

Moon, in addition, stressed the need to delegate some of the central government's authority to provincial governments and establish a new Cabinet meeting involving the leaders of provinces and major cities.

In his statement submitted to the panel, Hong Joon-pyo, the presidential candidate of the conservative Liberty Korea Party, backed Moon's proposal for instituting the four-year presidency that allows a second term. Hong, in particular, called for a government model designed to decentralize presidential powers through delegating part of them to the prime minister.

Ahn did not put forward any specific government model, saying that he is open to "all possibilities," including a model featuring limited presidential authority or a semi-presidential system in which the prime minister, picked by the parliament, handles domestic state affairs. But he did oppose a parliamentary cabinet system like in Japan, saying it is "premature" to apply the system to Korea. He cited a lack of public support for the legislature mired in relentless factional, partisan and ideological feuds.

Sim Sang-jeung of the progressive Justice Party stressed that the constitutional revision should be carried out in a way that strengthens citizens' fundamental social and economic rights. She criticized the fact that the ongoing debate on the revision focuses too much on the country's power structure. 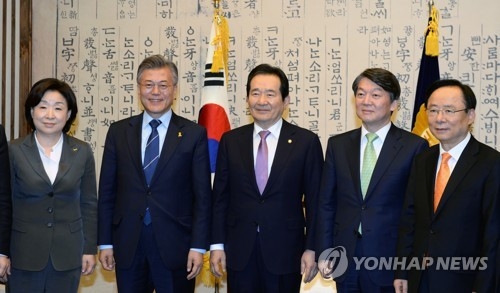