In a press release, the nominee of the People's Party said his No. 1 pledge is to denuclearize and establish a peace regime on the Korean Peninsula on the foundation of strong independent defense capabilities.

He is currently seen in a duel with Moon Jae-in of the liberal Democratic Party ahead of the May 9 poll. 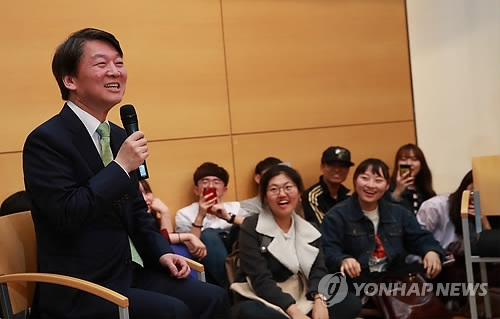 Ahn vowed to pursue independent defense capabilities to enable the nation to maintain an advantage over North Korea in terms of military power and actively respond to changes in the regional security landscape.

The two-term lawmaker and former software mogul said he would seek to denuclearize the peninsula through international sanctions on Pyongyang and a resumption of multilateral talks on its nuclear program, and achieve a peaceful unification of the two Koreas through mutually beneficial and advanced diplomacy.

To meet these ends, Ahn called for gradually increasing defense spending to 3 percent of the gross domestic product and expecting to need an extra 10 trillion won (US$ 8.77 billion) over five years.

The candidate grouped pledges No. 2-4 under the title "Good Growth, Good Jobs" and laid out specific policies to achieve those goals.

He promised to establish a basis for good jobs by simultaneously pursuing what he called revolutions in the education, science and tech, and start-up sectors.

He said he would dramatically raise the productivity of state research and development and build cross-sector integration.

The candidate also put forward the eradication of unfair trade as well as corruptive ties between political and business circles. In particular, his vision centers on reforming the family-controlled conglomerates known as chaebol while protecting and promoting small businesses to improve the livelihoods of average citizens.

In the final category of the group, Ahn promised to resolve chronic youth unemployment and job insecurities among the older generations while expanding the participation of women and senior citizens in the labor market. His policies include putting an end to the abuse of irregular workers and shortening working hours.

Other pledges revolve around creating a better democracy through the separation of powers and balanced development across regions, constructing a social safety network, eliminating man-made disasters, pursuing gender equality, improving the environment, and helping the agricultural and fisheries sectors contribute to public health and food security.