DAEJEON, April 12 (Yonhap) -- Three additional Siberian tigers will be released into a "tiger forest" inside an arboretum in southeastern South Korea in June and July as part of efforts to preserve the species in the wild, the Korea Forest Service said Wednesday.

The relocation of the tigers from Seoul Grand Park to the 4.8 hectare forest at the National Baekdu-daegan Arboretum on a mountain range in Bonghwa, a town in South Korea's southeast province of North Gyeongsang, will come after a couple of Siberian tigers were returned to the forest in January. The Baekdu-daegan, or the spine of the Korean Peninsula, refers to a mountain range stretching from Mount Paekdu in North Korea to Mount Jiri in the South. 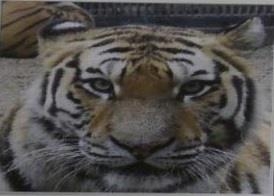 In January, the service released Geumgang, an 11-year-old Siberian tiger, and another tiger named Duman, 15, into the forest. Both tigers are male, were donated by China, and were raised at the amusement park O-World in the city of Daejeon, central South Korea.

However, Geumgang died of urine poisoning caused by chronic renal failure eight days after his release.

Siberian tigers, also called Mount Paekdu tigers, are known to have last been captured in the wild on the Korean Peninsula in 1921.

The forest service is scheduled to finish two to three months of training on the tigers for their reintroduction to the wild after the relocation and to open the arboretum to the public in September or October.

The tiger forest, the largest one displaying tigers in South Korea, is made similar to the surroundings of natural habitats where wild tigers live and has safety fences around it that keep the tigers from escaping to ensure the safety of visitors who are allowed to see them roaming in the wild.

In South Korea, 50 Siberian tigers are raised at zoos nationwide. The arboretum has an area of 5,179 hectares, the largest in Asia.