(ATTN: UPDATES throughout with Fox interview)
By Chang Jae-soon

"We are sending an armada, very powerful. We have submarines, very powerful, far more powerful than the aircraft carrier, that I can tell you. And we have the best military people on Earth," Trump said in the interview with Fox Business, referring to an aircraft carrier strike group heading to waters off the Korean Peninsula.

"And I will say this. He is doing the wrong thing ... He's making a big mistake," he said.

Tensions on the Korean Peninsula have been running high amid speculation that North Korea may conduct its sixth nuclear test or carry out a threatened test of an intercontinental ballistic missile capable of reaching the U.S. around its key anniversaries in April.

"The first thing I brought up was North Korea. I said, 'You've got to help us with North Korea, because we can't allow it. And it's not good for you. And you have a tremendous power because of trade,'" Trump said, referring to last week's talks with Xi in Florida.

"Now, he then explains thousands of years of history with Korea. Not that easy. In other words, not as simple as people would think. They've had tremendous conflict with Korea over the years. Now, his father was in China four times. He was never in China," he said, referring to North Korean leader Kim Jong-un and his late father, Kim Jong-il.

Trump said he again pressed Xi to use trade with the North as leverage.

"I said, 'Look, you have a tremendous power because of trading through the border.' If they don't get food, they don't get, you know, they can't sell their coal. In fact, I hear today two massive coal ships from North Korea were sent back to North Korea, heading to China. They were sent back, which is a very good sign," he said.

Trump said he told Xi that China will "do much better on trade if they help us with North Korea."

Trump said he and Xi had about five hours of one-on-one talks on Thursday and Friday last week.

"I really liked him. We had a great chemistry," he said. "We were going to have a 10 or 15 minute sit-down. It lasted for three hours." 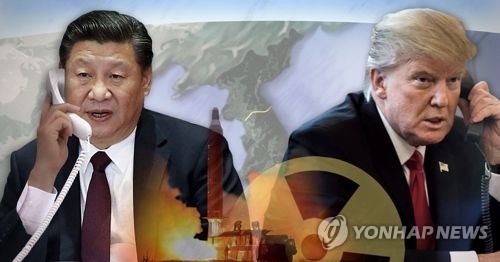 "Had a very good call last night with the President of China concerning the menace of North Korea," Trump said in a tweet earlier Wednesday.

Chinese state broadcaster CCTV reported earlier that Xi emphasized the importance of a peaceful resolution to the nuclear issue during the call with Trump, and the two sides agreed to strengthen high-level consultations.