Spicer made the remark during a discussion at the Newseum in Washington after MSNBC's Greta Van Susteren asked how different Trump's handling of North Korean threats will be compared with his predecessors, who failed to keep the regime from moving forward with its nuclear programs.

"I would go back to last Thursday night. We also had, you know, six-plus years of the last administration drawing red lines and saying that they weren't going to do anything. This president took very decisive action," Spicer said.

"The world community, a bipartisan domestic group here applauded the president's action. I think, with North Korea, as I mentioned, the president has had very productive talks with President Xi. We'll see where those talks land," he said, referring to last week's summit talks between Trump and Chinese President Xi Jinping.

Tensions on the Korean Peninsula have risen sharply amid concern the North could undertake additional provocations, such as a nuclear test or an intercontinental ballistic missile test, to mark a key national holiday this weekend.

The U.S. has sent an aircraft carrier strike group led by USS Carl Vinson toward the Korean Peninsula in a show of force designed to warn the North against additional provocations. The dispatch also sparked fears the U.S. might be contemplating a preemptive strike.

Spicer said that China's role is key to solving the North Korea problem.

"I believe that the president and a lot of the cabinet had very productive talks with China. There's a lot of stuff that can happen diplomatically to continue to isolate North Korea and to undermine their ability to possess and launch nuclear capabilities that threaten us," he said. 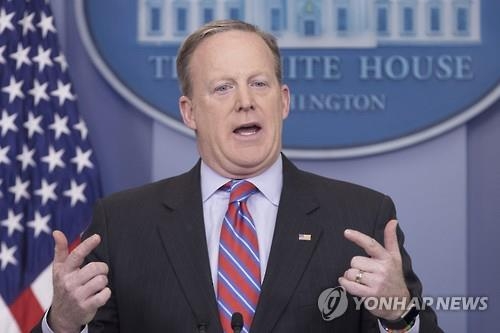