Tillerson made the remark during a joint news conference in Moscow with Russian Foreign Minister Sergei Lavrov in response to a question whether the U.S. dispatch of the massive strike group signifies plans for military intervention in North Korea.

"The Carl Vinson strike group is routinely in the Pacific Ocean, in the Pacific Theater, and its movements in the Pacific are made in a way that's planned by military planners. There is no particular objective in its current course. The Vinson sails up and down the Pacific routinely," Tillerson said.

"So I would not read anything into the Carl Vinson's current locations," he said.

Tillerson said that he and Lavrov agreed that North Korea "needs to be denuclearized." 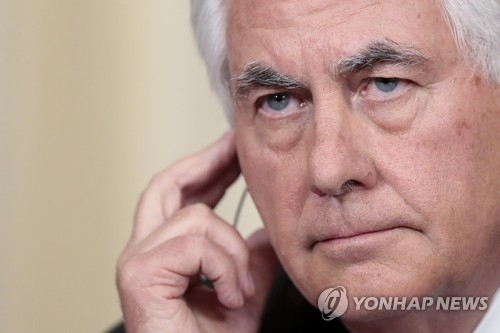 Lavrov called for a peaceful resolution of the problem.

"We still have a common determination to resolve this issue through peaceful means, to achieve denuclearization of the Korean Peninsula through diplomatic talks," he said. "We believe that we've got to rally around the cause of finding a peaceful solution to this issue."

Earlier this week, the U.S. Pacific Command redirected the Carl Vinson strike group to waters off the Korean Peninsula, rather than participating in an exercise in Australia, a powerful show of force designed to warn the North against additional provocations.

The dispatch also sparked fears the U.S. might be contemplating military action against the North.