The North's leader guided the contest of the Korean People's Army (KPA) special operation forces, during which combatants dropped from light transport planes, according to the Korean Central News Agency (KCNA).

Kim expressed satisfaction, saying, "Bullets seemed to have their eyes, and they were crack shots never missing targets" after watching an automatic rifle firing by combatants of the special operation battalion under the direct control of KPA Unit 525, it said.

Concerns are growing that North Korea could soon conduct its sixth nuclear test or launch a long-range rocket around key anniversaries in April.

The country will mark the 105th birthday of late founder Kim Il-sung on Saturday, and April 25 is the 85th anniversary of the KPA's creation.

The United States has sent the Carl Vinson aircraft carrier strike group again toward the Korean Peninsula in an apparent effort to counter North Korea's threats. The North vowed to take tough counteractions, calling the dispatch a "reckless" act.

Concerns are also growing here that the U.S. may seek a pre-emptive attack on the North similar to its latest airstrike against Syria.

Washington has said "all options" are available, including possible military actions to counter North Korea's threats. 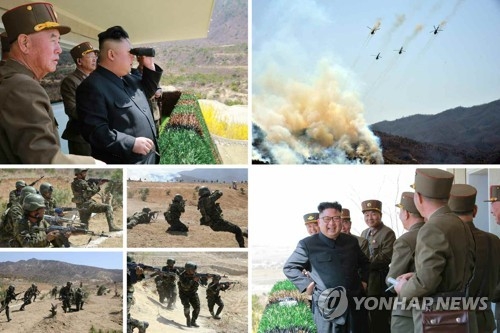