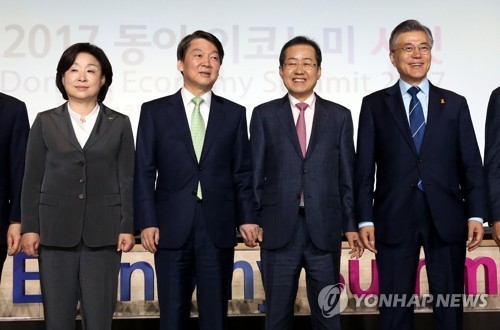 Ahn, co-founder and former leader of the center-left People's Party, gained 2.4 percentage points to 36.5 percent in the same period, while Hong Joon-pyo of the conservative Liberty Korea Party came in a distant third at 8.1 percent.

Moon has topped Realmeter surveys for 15 consecutive weeks ahead of the May 9 election. In the latest survey, he led in all regions except the southeastern area of Daegu and North Gyeongsang Province, and in all age groups except voters aged 50 or above.

Ahn took first place in those categories and continued his ascent for the fifth consecutive week. However, his daily approval rating fell Tuesday and Wednesday after climbing an average of 2.9 percentage points for six consecutive polling days.

The other three main contenders lost just under or above 1 percentage point each.

In a hypothetical three-way race, Moon still led with 47 percent, followed by Ahn with 37.2 percent and Hong with 8.8 percent.

In a virtual matchup, Moon beat Ahn with 49 percent against 41.1 percent.

The survey was conducted on 1,525 voters nationwide and had a margin of error of 2.5 percentage points at the 95 percent confidence level.