Yun Byung-se refused to speculate whether Washington was preparing to pre-emptively strike following additional provocations from the communist North but insisted the U.S. will not take such measures without first consulting with Seoul.

"In fact, the U.S. is working to reassure us that it will not, just in case that we might hold such concerns," he said in a special report to the parliamentary committee on foreign affairs.

Thursday's meeting came amid growing concerns here over a possible U.S. attack against the North.

In an apparent attempt to put pressure on Pyongyang, Washington has sent a nuclear-powered aircraft carrier, the USS Carl Vinson, to waters off the Korean Peninsula, further prompting suspicions here over an imminent pre-emptive strike against the North's nuclear capabilities.

Both liberal and conservative members of the parliamentary committee expressed concerns the U.S. may bypass Seoul to directly strike Pyongyang in what they called "Korea passing."

"Even just before I came into this meeting, ranking U.S. officials, mindful of such concerns here, repeatedly reaffirmed that (the U.S.) will closely discuss with South Korea its North Korea-related measures," the minister told the meeting. 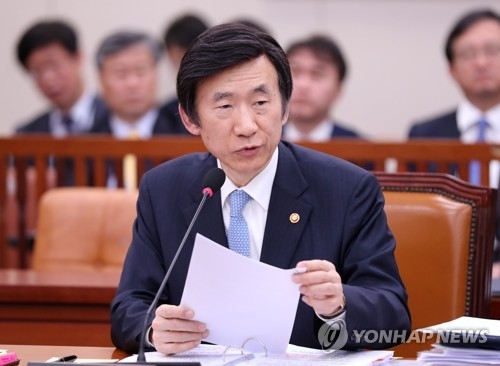 U.S. President Donald Trump has repeatedly noted all options are on the table in dealing with North Korea, and that his country may take unilateral measures to solve the North Korean nuclear problem.

"We will work to clearly show through talks between the countries' foreign and defense ministers, and through a meeting with U.S. Vice President (Mike) Pence, who is due here this weekend, how thoroughly prepared South Korea is to defend itself and how well it can maintain peace on the Korean Peninsula," he said.

"The U.N. Security Council already has the two most powerful sanctions resolutions against North Korea in place, and as the United States and China recently discussed, additional measures that will be difficult for North Korea to endure will be taken," Yun said.

The North has conducted five nuclear tests so far, and is widely viewed as preparing for an additional test in the near future, possibly before the end of April.

Yun said China, Pyongyang's key ally, may also take part in additional sanctions against the North should it conduct a nuclear test or test-fire ballistic missiles, adding the new sanctions will likely include strong measures that "have been reserved" or that required but "could not win China's cooperation" before.

(2nd LD) U.S. will not bypass Seoul when dealing with N. Korea: FM

(2nd LD) U.S. will not bypass Seoul when dealing with N. Korea: FM