Overseas sales of Korean sauces, such as ganjang (soy sauce), gochujang (red chili paste) and doenjang (soybean paste), rose 8 percent to a combined US$53 million last year from a year earlier, according to the data by the Korea Customs Service (KCS).

The 2016 figure marked the largest since 2000 when the KCS started to compile related data.

Exports of gochujang rose 10.8 percent on-year to $31.3 million last year, accounting for 59.3 percent of the total exports, while those of ganjang climbed 2.6 percent to $13 million and sales of doenjang added 6.8 percent to $8 million.

By country, the United States is the biggest importer of South Korea traditional sauces as exports to the North American country accounted for 29.9 percent of the total overseas sales, followed by China with 16.9 percent and Japan with 7 percent. 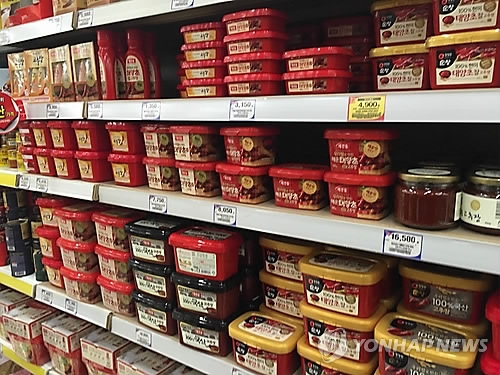