SEOUL, April 13 (Yonhap) -- South Korea's top court on Thursday confirmed a 30-year prison term for a man convicted of stabbing to death a 22-year-old woman near one of the country's busiest subway stations in Seoul which sparked nationwide shock and protests.

Upholding a lower court's decision, the Supreme Court convicted the man, identified only by his last name Kim, of stabbing the victim multiple times in a bathroom in a building near Gangnam Station in May last year. The victim, whose identity was withheld, was a complete stranger to Kim.

Prosecutors said the 35-year-old waited for about 50 minutes for a woman to show up in the bathroom. When the victim came into the unisex restroom, Kim attacked her with a knife, they said.

The lower court earlier said it took into consideration the seriousness of the crime, the fact that it was done against a stranger, and the social anxiety caused by the incident.

Prosecutors originally requested a life sentence, but the court handed down a 30-year term, acknowledging that Kim has schizophrenia. Kim has a record of being hospitalized for the mental illness more than six times since 2009, according to prosecutors.

The case has triggered nationwide debate over crimes against women. Thousands of South Korean women took to the streets after the incident, paying their respects to the victim. 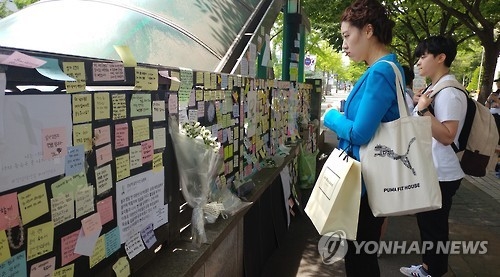