The government eased the loan-to-value (LTV) and debt-to-income (DTI) ratios in 2014 to allow home buyers to borrow up to 70 percent of their property value and 60 percent of their income for mortgage payments.The easing of the home loan regulations resulted in a sharp rise of household debt in recent years with household credit exceeding 1,344 trillion won (US$1.18 trillion) as of the end of last year, up 11.7 percent from the previous year. This raised concerns over possible havoc in case of interest rate hikes take place in the coming years.

Moon Jae-in of the liberal Democratic Party has said he plans to increase property tax, citing the ratio of the property tax to the gross domestic product (GDP) standing at 0.79 percent compared to the average ratio of 1.09 percent for OECD member states.

Moon's approval rating was 32.7 percent in a public survey released on Sunday with Ahn Cheol-soo of the centrist People's Party coming in first with 36.8 percent. Approval ratings between Moon and Ahn fluctuate depending on polls, although all clearly show them in the lead. Hong Joon-pyo of the former ruling Liberty Korea Party garnered only 6.5 percent in the wake of the impeachment of the former President Park Geun-hye over alleged bribery and power abuses.

Ahn has said he will normalize the housing tax system, indirectly expressing his intentions to tighten housing loan regulations.

Some analysts predict any hikes of the property tax should entail real estate transfer tax cuts.

"In that case, calls for property sale tax cuts will be mounting as the property transfer tax rate is higher in South Korea than those in the United States and other advanced countries," an analyst said.

Both Moon and Ahn have said they will tighten the DTI and LTV ratios to help reduce the household debt.

The housing industry, however, has demanded the government extend the current DTI and LTV ratios until July next year to revitalize the sagging construction industry. The current eased ratios are to expire in July.

Moon's Democratic Party has also submitted a bill to limit rent and jeonse fees, a returnable lump sum deposit unique to South Korea, which the incumbent government has opposed for fear of dampening the housing market by restricting homeowners' right to property ownership.

Moon also proposed investing 50 trillion won in the coming five years in the development of new towns and renovation of old city neighborhoods across the country while building 50,000 public rental houses and additional dormitories for up to 50,000 students.

Ahn for his part pledged to build 50,000 public rental homes for youths annually and subsidize the construction of dormitories in universities.

Market watchers say the country's housing market has not been affected seriously by the outcome of the presidential elections in the past.

"The real estate market has been swayed not by the presidential election but by economic factors such as supply and demand and regional development projects," Lim Byung-cheol of Real Estate 114, a property market research company, said. 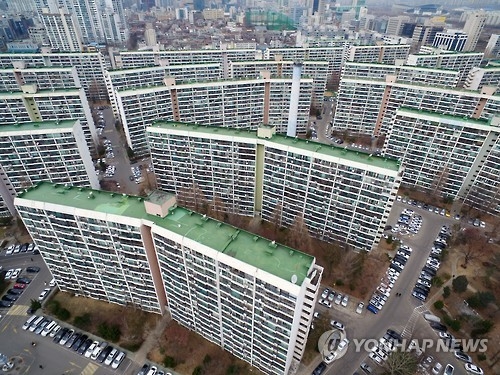