SEOUL, April 13 (Yonhap) -- Small sample size alert: but Oh Seung-hwan, the usually reliable South Korean reliever for the St. Louis Cardinals, has been hit hard so far in the 2017 season because, as analytics shows, his slider hasn't been nearly as effective as last year.

Oh recorded 19 saves and posted a 1.92 ERA last season, after replacing Trevor Rosenthal as the Cards' closer in July. The all-time saves leader in the Korea Baseball Organization (KBO) struck out 103 batters in 79 2/3 innings, and the opponents batted .190 against him.

He got off to an inauspicious start to 2017, blowing a save in the season opener against the Chicago Cubs on April 2 (local time) by giving up a three-run home run to Willson Contreras in the ninth inning. Oh was still credited with a win when the Cards bailed him out with a walk-off run in the bottom ninth.

Oh allowed another home run in his next outing against the Cincinnati Reds, the first time he's given up a long ball in back-to-back games. Oh then gave up a run on two doubles in one inning of work against the Washington Nationals on Tuesday, before finally tossing a scoreless outing Wednesday against the same Nats. 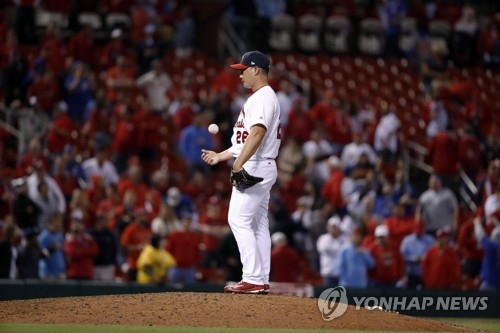 Oh opened the 2017 season by giving up at least an earned run in three consecutive outings. He never once conceded a run in back-to-back games last year.

He has given up five extra-base hits so far, and four of them have been against sliders, his go-to pitch last season. Oh allowed five home runs all last year, and just two on sliders. Already this year, both of the homers he's allowed have been against his sliders.

Through Wednesday's game, opponents are hitting .500 off Oh's sliders. Again, the sample size is small -- four appearances, 4-for-8 -- but all last season, the hitters batted .164 (18-for-110) against Oh's sliders, according to statistics website, BrooksBaseball.net. Oh has hung those sliders in the middle or the lower part of the zone, right in the wheelhouse of smart hitters like Joey Votto of the Reds and Daniel Murphay of the Nationals.

Also, Oh has yet to strike out a batter with his slider, compared to 47 strikeouts with that pitch last season.

Numbers also show that Oh is inducing fewer swings and misses with his slider than last year.

According to FanGraphs, another baseball stats site, Oh induced swinging strikes on 27.4 percent of his sliders in 2016, but the rate is down to 17.7 percent this year.

He has yet to induce a ground ball with his slider this year, after doing so 55 percent of the times in 2016.

Amid much hand-wringing over Oh's shaky start, theories have abounded as to why the right-hander hasn't been very sharp.

One has it that participating in the World Baseball Classic for South Korea in March might have affected his preparation. The tournament was held in Seoul in early March, and he had to make the long trip from his spring training site in Florida to pitch here. And at a time when pitchers are just getting into form and trying to be ready for the start of the regular season in early April, Oh was forced to go ahead of schedule and might have peaked a bit too early.

He wowed the crowd at Gocheok Sky Dome in Seoul -- even drawing oohs and ahhs with his warm-up pitches -- and reached over 93 mph with his fastballs on the speed gun with seeming ease. But when the major league season rolled around, his average fastball velocity dipped a bit to around 91 mph.

On the brighter side, Oh has always tended to throw harder as the season wore on. In 2016, his average four-seam fastball velocity was 92.7 mph, according to BrooksBaseball, but peaked at 94.4 in August. In the final month of the season, Oh still threw his four-seamers at close to 94 mph on average.

Over the past two days, Oh's fastballs sat around 93 and 94 mph. He even touched 96 mph on Tuesday against the Nats' Bryce Harper, though he still jumped on it for a double. 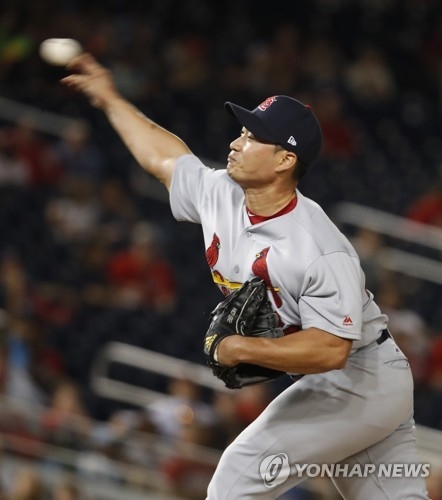 Velocity likely won't be a concern for too long. But another theory on Oh's struggles claims that major league hitters have figured out Oh, who has essentially been a two-pitch closer with the four-seamer and slider. Closers in the bigs, for the most part, have relatively short shelf lives anyway, with the top-notch fireballers like Aroldis Chapman of the New York Yankees and Kenley Jansen of the Los Angeles Dodgers being few exceptions. Some teams are already mulling switching their closers this year.

Oh obviously won't add another pitch to his repertoire -- even before he joined the Cardinals, Oh insisted he wouldn't change his approach or expand his arsenal just because he was going to a different league -- and it'll just be a matter of throwing the right pitches at the right time to the right spots.

And after giving up a double to Ryan Zimmerman, Oh got Jayson Werth to fly out to shallow right on a sharp slider that was reminiscent of his good moments last year -- an 87 mph pitch down and away from the right-handed hitter.

For now, Oh's job as the closer appears to be safe, given manager Mike Matheny's oft-stated faith in him and the overall state of the Cardinals' relief corps. In fact, Oh may even be the least of concerns for Matheny, whose bullpen sported an ugly 8.14 ERA in eight games prior to Wednesday, by far the worst in the majors, with 13 walks and six home runs in just 24 1/3 innings.

Rosenthal, former All-Star closer, has been activated from the disabled list, but allowed a run on three hits in a third of an inning Wednesday.