"As the South Korean economy highly depends on exports and global demand, the upside trend in the world economy will be a boon for the country," Finance Minister Yoo Il-ho said in a ministerial meeting in Seoul.

Hopes are high that the South Korean economy has entered a positive cycle on the back of robust exports and recovering domestic demand.

Retail sales also gained 3.2 percent on-month in February, a rebound from a consecutive drop for the November-January period.

The top economic policymaker, however, said the government will not let its guard down as there are still downside risks that may spark a sudden foreign outflow from the local financial market.

"As we still face an array of internal and external uncertainties, the government will do our best to manage possible risks in the coming months," said Yoo.

He also said the Seoul government will seek ways to bolster cooperation with the United States at the scheduled visit by U.S. Vice President Mike Pence next week.

It is also focusing on dealing with trade tension with China, who raised non-tariff barriers against South Korean products in retaliation for the Seoul's decision to deploy a U.S.-led missile defense system, or THAAD, the minister said. 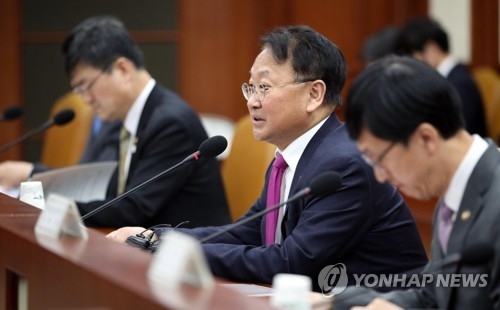