During their first TV debate, the five contenders explained what they would do if North Korea carries out a major provocation, such as a nuclear test, and the United States responds with a threat to strike the communist country. 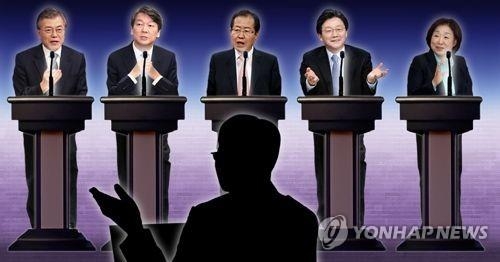 Moon Jae-in, the front-runner and nominee of the liberal Democratic Party, said he would first call U.S. President Donald Trump to make it clear he must not carry out a pre-emptive strike without South Korea's consent. Then he said he would order a state of emergency and urge Pyongyang through various channels to stop all provocations that could trigger a pre-emptive strike by the U.S.

Ahn Cheol-soo of the center-left People's Party said his first step would be to make phone calls to the leaders of the U.S. and China. He said he would tell Trump that there can be no war and ask Chinese President Xi Jinping to put pressure on Pyongyang to halt its reckless behavior. After that, the former software mogul vowed to issue a statement urging the North to immediately stop its actions.

Hong Joon-pyo of the conservative Liberty Korea Party also underscored the importance of first preventing a pre-emptive strike through talks with Washington and Beijing. If the U.S. goes ahead anyway, Hong said he would put the armed forces on emergency alert and prepare for battle.

Yoo Seong-min of the splinter conservative Bareun Party stressed the importance of close coordination with the U.S. to ensure any strike on the North is carried out by consensus after thorough military preparations. He said a pre-emptive strike would be a preventive, self-defense measure in the event of an imminent threat of attack from the North.

Meanwhile, Sim Sang-jeung of the minor progressive Justice Party said she would first give a special address as president and then hold talks by phone with the U.S. and Chinese leaders. And if necessary, she would dispatch a special envoy to make a case for the principle of keeping peace on the peninsula, she said.

The debate was jointly hosted by local broadcaster SBS and the Journalists Association of Korea ahead of the May 9 presidential election.