The remarks by Korea Development Bank (KDB) CEO Lee Dong-geol came as the National Pension Service (NPS) is set to hold a meeting later this week to decide whether to accept a debt-for-equity swap plan, seen as a crucial test for Daewoo Shipbuilding to receive fresh funds to repay its debts.

"The room for negotiations with the NPS is 100 percent open," Lee told reporters, adding that he expects the pension fund to make a "wise" decision.

Lee's remarks were a shift from the KDB's previous stance that the bank will not accept demands by the NPS.

Late last month, the KDB and another state-run creditor bank announced a fresh rescue package worth 6.7 trillion won (US$5.9 billion) for Daewoo Shipbuilding, but only if all stakeholders agree to the debt-for-equity swap plan.

The NPS, which holds about 30 percent of bonds sold by Daewoo Shipbuilding, has demanded the KDB further slash the equity capital of the shipbuilder.

Among other demands, the NPS has asked the KDB to cover the debts of Daewoo Shipbuilding that are maturing this month. 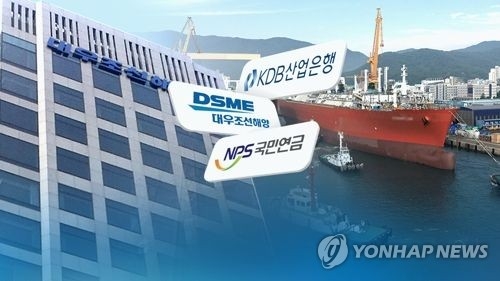 Main creditor open for negotiations with NPS on Daewoo Shipbuilding

Main creditor open for negotiations with NPS on Daewoo Shipbuilding