SEOUL, April 14 (Yonhap) -- At first glance, most people will be hard pressed to figure out what kind of service is provided by a space which seemingly has the ambiance of a quiet library or a well-furnished cafe with very comfortable sofa seating arrangements.

Upon closer inspection, you can see some people leaning back on chairs, others lying face down in a private space, and still others hanging around rows of shelves picking up what they want.

More interestingly, a first-timer to the place will be surprised to see endless volumes of comics, with novels and magazines also filling a dozen wall-mounted bookshelves. 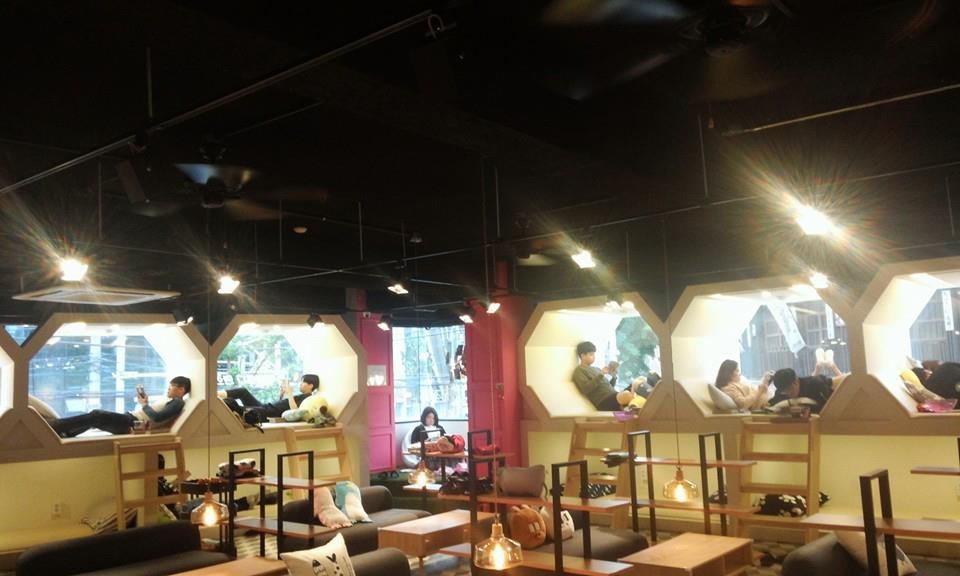 The place on a street corner of Hongdae, a vibrant area known for its urban arts, indie music and clubs, also provides soft drinks and snacks to visitors. An Internet connection is also thrown in. What is more appealing is the relaxed atmosphere that welcomes the modern nomad, who is always busy with everyday living, to take time off with a couple of books.

Better Comics is one of dozens of such cafes in nearby Hongdae, southern Seoul, which are constantly in the process of transformation for visitors wanting to relax in an airy yet cozy atmosphere while reading comics and publications in various genres.

The comics cafe conveys a laid-back charm for most, while, for slightly older people, it invokes nostalgia for the days when people often spent hours reading romance comics or martial arts novels in rooms that were often moldy and musty. 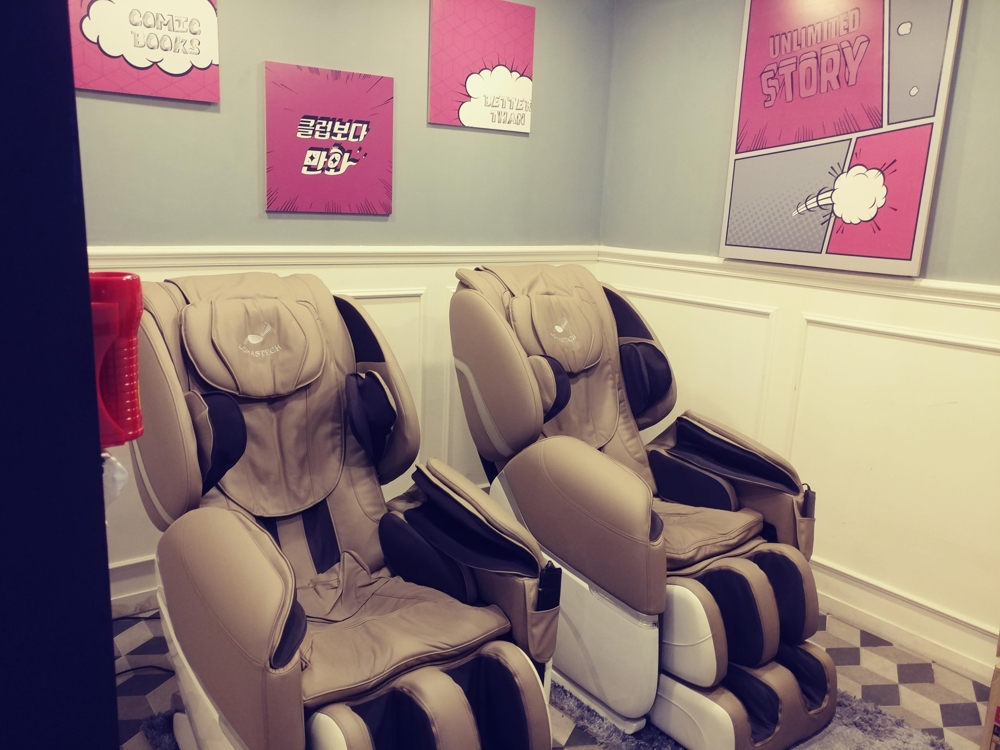 "This is what I wanted for so long. I was a comics fan, but had no time to read them," said Lee Jin-soo, a 30-something office worker. "I visit here once or twice a week to read comics as well as to relax in a clean and cozy place."

Anyone can use the cafe facilities from 11:00 a.m. to midnight for just 2,400 won an hour. The fee covers the use of all of the available equipment as well.

Park Jung-min, the manager of the shop, says the cafe houses some 20,000 comic books, and every month it receives new comics releases. The shop staff also work to find out-of-print comic editions to meet customer demand.

"On weekends, parents with kids also come, and customer ages vary considerably," said Park. But those in their 20s and 30s form the core customer base.

The cafe's most popular facilities are the individual seat booths. But if you want a more private place, a beehive-like space is recommended -- these are partitioned areas with floor mats, blankets and puffy cushions, where you can enjoy comic books without being disturbed. You can even take a nap in there.

The shop's exclusive area for two electronic massage chairs is also very popular, according to Park. "It's very nice, and does not smell moldy," said a 21-year-old university student asking not to be named. "Reading comics is a stress-buster for me, and is a fad with some of my friends."

Another comic book cafe, called Happy Jakdang in nearby Hongdae, provides a somewhat different environment for visitors, although like others it provides a wide array of comics, from the latest big-hit releases to old series which are not readily available.

The cafe has booths with chairs or a sofa for individuals or couples, but does not have beehive-looking spaces. "Visitors seem to still have a passion for comics because they have grown up reading them," said Jang Jong-jin, the manager of Happy Jakdang. "So we try to stock an exhaustive range of comics titles, including romance, sports, comedy and fantasy," he said.

The popularity of the comics cafe has led to the birth of comic cafe chains such as Nolsoop across the country.

"We have some 150 chain shops across the country, and plan to further expand our chain comic book cafes," said Kim Hwa-won, the manager for Nolsoop's marketing division.

Kim said her company has started the business as a way to nurture a reading culture in the country, and it has proved to be successful.

Since individually buying comics can be expensive, comic cafes do the purchasing for their customers, she said.

Ironically, the popularity of comic book cafes is partly attributed to the birth of webtoons, or digital comics. Naver, the country's top Internet portal, and its smaller rivals have released a series of mega-hit webtoons, which have sparked some middle-aged locals to flock to comics cafes.

According to an estimate by the Korea Creative Content Agency, South Korea's comics market was estimated at US$415 million last year, the six-largest market around the globe. 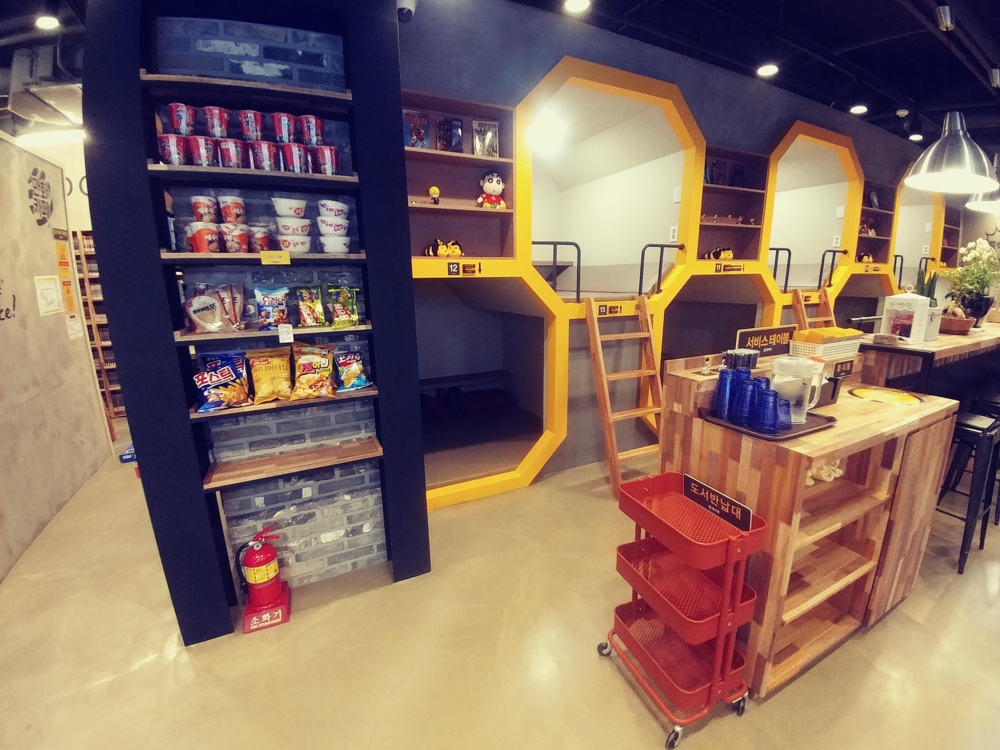