The Jongno Police Station in Seoul said they confiscated materials related to the March 10 demonstration from the office of the pro-Park group in southern Seoul. The group was formed to campaign against Park's impeachment over a massive corruption scandal involving her close friend and aides.

Some participants in the rally used makeshift weapons against police who barred them from approaching the court. Three people died after they were injured or collapsed in the process.

Police on Wednesday questioned Chung Kwang-yong, the group's spokesman, for some 14 hours over allegations of organizing the violent demonstration.

Chung said police are responsible for the casualties, claiming they used excessive force against the enraged crowd. 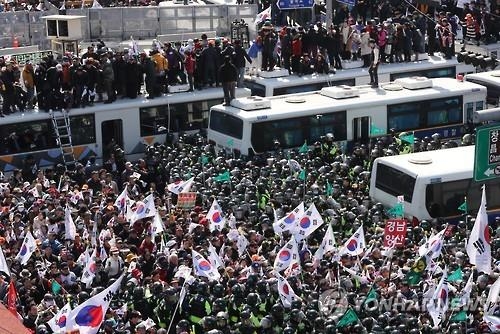