Hwang made the call in an address marking the 98th anniversary of the establishment of Korea's provisional government in Shanghai, China, in 1919. Korea was under Japanese colonial rule from 1910-45.

"The Japanese government should squarely face history as it is, and show a sincere and consistent attitude in regretting its past mistakes and educating future generations," he said during a ceremony at the Kim Koo Museum and Library in Seoul. "A correct perception of history is the starting point and necessary condition for a future-oriented partnership between South Korea and Japan." 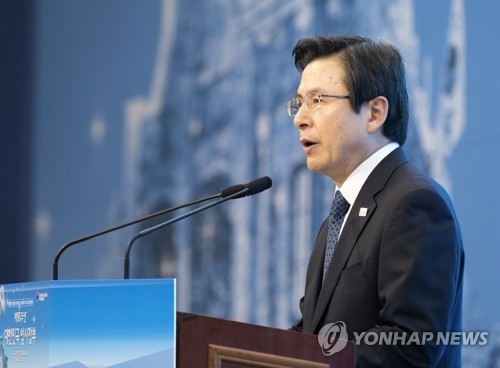 Tensions flared this year after Tokyo recalled its ambassador to Seoul in protest of the installation of a girl statue symbolizing Korean victims of Japan's wartime sexual slavery in front of the Japanese consulate in the southeastern port city of Busan.

Japan also angered South Korea last month by renewing claims to the latter's easternmost islets of Dokdo in a new set of textbooks and education guidelines.

At a meeting of government ministers earlier in the day, Hwang discussed the growing possibility of an additional North Korean nuclear test or missile launch.

He said South Korea and the United States are fully prepared to respond to any provocation from the North and maintain close coordination on the issue based on their firm alliance.

U.S. Vice President Mike Pence's upcoming visit to South Korea will serve as an opportunity to further strengthen that coordination and defend the nation with a watertight security posture, he said.

Hwang also vowed to work with the national election watchdog to ensure a fair and transparent presidential election on May 9.