Its leader Kim Jong-un and other officials attended the ceremony to mark the completion of the construction of Ryomyong Street lined by skyscrapers. according to Japan's broadcaster NHK.

Kim had ordered the country to finish the project before the 105th birthday of the late founder Kim Il-sung, which falls on April 15.

A host of foreign investors and journalists have been invited to North Korea as Pyongyang is set to celebrate Kim's birthday, known as the Day of the Sun in North Korea.

Reuters reported that foreign reporters in North Korea have been told to prepare for a "big and important event" on Thursday.

Jeremy Koh, a reporter at Singapore's Channel NewsAsia, said on his Twitter account that "after much secrecy, foreign reporters in Pyongyang watch Kim Jong-un preside over the opening of the skyscraper-lined Ryomyong Street."

North Korea's state media has yet to unveil relevant reports. 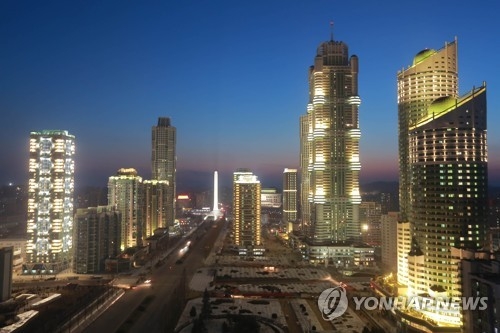 Ryomyong Street will house about 4,800 households and about 30 support facilities for residents in about a 900,000-square-meter area, said Minjok Tongshin, a U.S.-based pro-North Korea website.

The ceremony came amid speculation that North Korea could conduct its sixth nuclear test or launch missiles to celebrate its key anniversaries in April.

North Korea's leader originally set the deadline for building Ryomyong Street for the end of 2016, but massive floods that hit the country's northeastern areas last year drained resources for the construction, causing delays.

Thae Yong-ho, a former North Korean diplomat who defected to Seoul last year, said that a set of international sanctions put a severe strain on Kim Jong-un's policy enforcement, including the construction of Ryomyong Street.