INCHEON, April 13 (Yonhap) -- A South Korean man was convicted Thursday of violating aviation security laws and assault by engaging in in-flight violence twice last year but was allowed to walk free after his sentence was suspended.

The Incheon District Court, west of Seoul, sentenced the 35-year-old man, identified only by his family name Lim, to one year in prison, suspended for two years, and a fine of 5 million won. It also ordered Lim to perform 200 hours of community service.

Prosecutors had demanded a prison term of two years and a fine of 5 million won.

Presiding Judge Park Jae-sung called the two in-flight commotions "malicious" but suspended the sentence, saying the accused as a first-time offender has reached settlements with victims for a considerable amount money and the victims have appealed for amicable management. 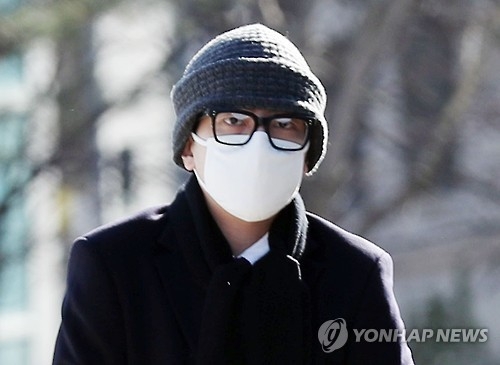 Lim was indicted on charges of assault for striking four flight attendants in the face and stomach as they were trying to bind him with rope while aboard a Korean Air flight that departed from Hanoi at 2:20 p.m. on Dec. 20 and was scheduled to arrive at Incheon airport, west of Seoul, at 6:35 p.m. the same day.

He also spat at a Korean Air aircraft mechanic who happened to be aboard the flight and tried to restrain him.

During the two-hour commotion, other passengers, including American pop singer Richard Marx, helped overpower the unruly passenger. He was known to have consumed two and a half shots of liquor after boarding the flight, which followed eight shots of liquor at Hanoi airport. He is the son of the chairman of a Seoul-based trading company.

Prosecutors also indicted him for another in-flight commotion on Sept. 9, 2016, on a flight to Vietnam from Incheon, in which he damaged a seat and hit flight attendants while under the influence of alcohol before being taken to Vietnamese police.