MOKPO, South Korea, April 13 (Yonhap) -- The South Korean government has been in talks with a local trade association to get some 100 billion won (US$88.5 million) in insurance money to defray the cost related to the sinking of the Sewol ferry, an official source said Thursday.

The Ministry of Oceans and Fisheries earlier estimated that it cost a total of 550 billion won to cover the search and rescue operations and to salvage the ill-fated vessel that capsized in waters near Jindo Island, some 472 kilometers southwest of Seoul, on April 16, 2014.

In the country's worst maritime disaster, 304 people, most of whom were high school students on a school trip, were killed, with nine still missing.

Seoul reportedly spent more than 112 billion won on the initial rescue operations at the time of sinking, and some 110 billion won was spent on compensation to the victims. Lifting the Sewol from the water will cost an additional 120 billion won.

Chonghaejin Marine Co., the Sewol's operator, had an insurance policy worth 110 billion won from the Korea Shipping Association (KSA). The ministry started negotiations to apply for insurance claims last year, while filing a lawsuit against the association, according to a government official.

"The ministry has been in talks with the KSA to receive the insurance money," he said. "It is making efforts to wrap up the negotiations by the end of June."

The Sewol was raised from sea and placed into a dry dock at the port of Mokpo on Tuesday. Workers are currently cleaning and disinfecting the hull before special teams begin searching for the remains of the missing people that may still be inside the wreck. 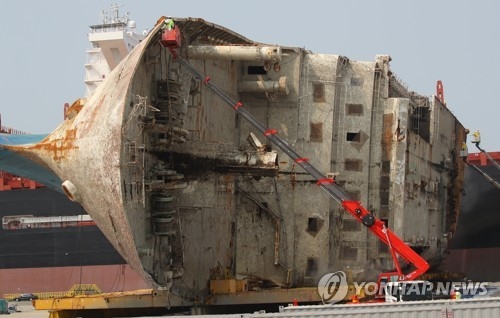