The rightist politician also assured business leaders that he will uphold the Constitution that guarantees "the freedom and creative initiative of enterprises and individuals in economic affairs."

"If I take office as president, I will undo all (unnecessary) regulations within a year," Hong said during the lecture hosted by the Korea Chamber of Commerce and Industry. 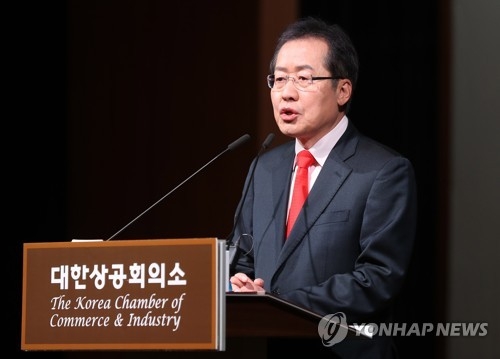 "Regulations have been the most effective means (for a government) to control enterprises," he said. "(The regulations) have given rise to low economic growth and a lack of jobs for young adults."

Hong, in addition, vowed not to raise corporate tax rates, saying that increasing taxes on businesses to bankroll welfare programs for low-income brackets "runs counter to the economic order of a free democracy."

"If we take power, we will roll out a policy to revive businesses ... a policy never seen in past administrations," he said.

Hong has been placed third in recent opinion polls with his support ratings boxed in woeful single digits ahead of the May 9 vote. The election is seen more favorable to the liberal bloc following a massive corruption scandal involving former President Park Geun-hye.

The race is seen shaping up to be a duel between Moon Jae-in of the liberal Democratic Party and Ahn Cheol-soo of the center-left People's Party with their ratings hovering over 30 percent each.