The women's national team returned home to a hero's welcome after winning the Asian Football Confederation (AFC) Women's Asian Cup Group B qualifying tournament in Pyongyang. The Taeguk Ladies stayed in the North Korean capital for 10 days to compete at the football tournament.

"We had a long trip, but we are all happy that we earned a good result," Cho said to reporters at Gimpo International Airport in Seoul. "We overcame the pressure of playing in front of a huge (North Korean) crowd. I'm proud that we won the ticket to the Asian Cup."

Cho was one of the leading performers at the qualifying campaign, scoring three goals to help South Korea book a spot at the Asian Cup.

South Korea and North Korea finished tied at 10 points with the identical records of three wins and a draw. The South, however, had a better goal difference, plus-20 to plus-17, and claimed the top spot in Group B, which also featured Uzbekistan, Hong Kong and India.

"The players were determined to qualify for the tournament, but it is true that we had a little bit of concern," she said. "But in the end, we returned home with the ticket and we're happy with that."

Cho said the match against North Koreans, which ended up in a 1-1 draw, was fierce. It was the first time that the South and the North clashed in a competitive football match in Pyongyang, either men or women.

"Because all of us could understand Korean, the atmosphere was very intense even before we entered the stadium," she said. "It felt strange that we spoke the same language, but since we had to compete, we thought of North Koreans as rivals."

Personally, Cho earned her 100th cap for South Korea in Pyongyang when she started against Uzbekistan last Tuesday. She also celebrated the milestone with her 16th international goal. At a welcoming ceremony at the airport, she received a trophy from the Korea Football Association for her achievement.

The 28-year-old midfielder became the third South Korean woman to make 100 international appearances, following Kwon Ha-neul and Kim Jung-mi. She made her international debut in 2007 and has been wearing the captain's armband since 2011.

Cho, however, said she isn't thinking about personal honor, but only about helping the team in upcoming tournaments.

"We still have to go to the World Cup," she said. "This time, we want to collect a better result than what we did in the past."

As the group winner from Pyongyang, South Korea can now compete at the 2018 Asian Cup in Jordan, which also doubles as the regional qualification for the 2019 FIFA Women's World Cup in France. The top five teams among eight nations at the Asian tournament will punch their tickets to the women's showpiece event.

South Korea are looking for their third World Cup appearance. They made it into the round of 16 two years ago in Canada.

"I thought if we couldn't qualify for the Asian Cup, we might have to sit for a long time without competing at a major tournament," she said. "There's no guarantee that South Korea can qualify for the Olympics, either. So, veteran players this time have really worked harder for the sake of women's football." 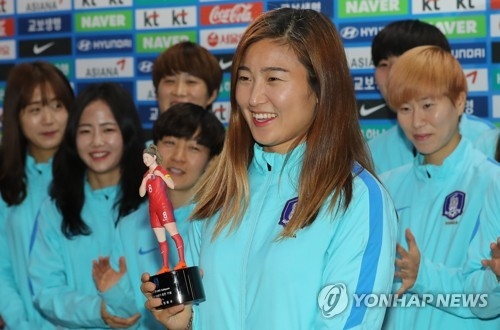