The top 10 campaign pledges were unveiled as the presidential front-runner is increasingly finding himself in a neck-and-neck race with Ahn Cheol-soo of the center-left People's Party with less than four weeks left until the May 9 election.

Ahn, the runner-up in most recent polls on the presidential election, unveiled his own top 10 campaign pledges on Wednesday.

Moon, also seeking to beat his conservative rivals, placed new jobs on the top of his list.

"Creating new jobs, the best gift to the people," his campaign said in a press release. 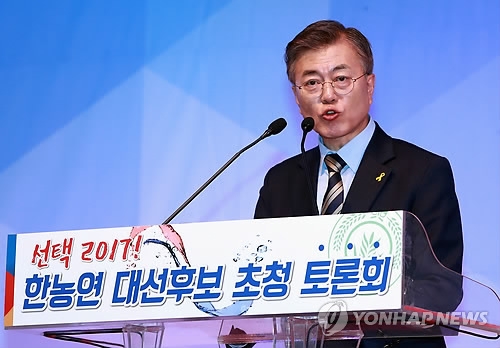 The second item on his list was political reform.

The upcoming election marks a rare, if not unprecedented, presidential by-election caused by the March 10 ouster of former President Park Geun-hye over a series of corruption allegations. The next president will be allowed to serve a full five-year term, but many presidential candidates, including Moon, have vowed to amend the Constitution to cut future presidencies to four years and allow the president to seek reelection.

His third priority as president, he said, will be to reform large conglomerates, which have long been blamed for a source of chronic corruption.

A permanent and peaceful resolution of the North Korean nuclear issue came next, in which the presidential front-runner vowed to develop or improve defense capabilities to counter threats from the communist state's nuclear and missile capabilities during his presidency if elected.

Moon also vowed additional support for the young, promising to temporarily expand the number of jobs in the public sector reserved for young people to 5 percent of the total from the current 3 percent.

He then promised better working conditions and gender equality for women.

The liberal presidential candidate vowed better welfare for the elderly, promising to provide a monthly allowance of 300,000 won to all elderly people in the lower 70 percent of the income bracket, an increase from the current monthly payment of between 100,000 and 200,000 won, his election camp noted.

Others included support for small, self-employed businesspeople and enhancing the country's overall safety.

He said he would reduce fine dust by 30 percent within his term by suspending old coal-fueled power plants during spring time, stopping the construction of new power plants, and strengthening cooperation with Chinese leaders on the issue.

Fine dust particles are thought to originate from both the western deserts of China and domestic smog sources. They are known to cause various respiratory problems and affect the body's immune system.