Jang returned home with her teammates from Pyongyang after South Korea clinched a place at the Asian Football Confederation (AFC) Women's Asian Cup. The women's team stayed in the North Korean capital for 10 days in a bid to qualify for the top Asian competition. They were in Group B, along with North Korea, Uzbekistan, India and Hong Kong.

"I thought it was going to be difficult to stay in Pyongyang, but I enjoyed my time there," Jang said to reporters at Gimpo International Airport in Seoul. "The food was good and everything went better than I thought."

Jang, a versatile attacker who can also perform as a wing back, was one of the heroes for South Korea, as she saved the team from a defeat to North Korea last Friday. The 22-year-old bagged an equalizer in the second half when her team was trailing 1-0 against their hosts. This was the first time that the two Koreas, either men or women, met in a competitive football match in Pyongyang.

Her goal eventually helped South Korea clinch the ticket to the Asian Cup over North Korea. The two Koreas finished tied at 10 points with the identical records of three wins and a draw. The South, however, had a better goal difference, plus-20 to plus-17, and claimed the top spot in Group B.

Only the group winner was able to join the 2018 Asian Cup in Jordan, which also doubles as the regional qualification for the 2019 FIFA Women's World Cup in France.

"I didn't think about scoring a goal, but I'm really happy that I did," she said. "I can't really remember the feeling after the goal because my teammates jumped on me and beat me up in celebration." 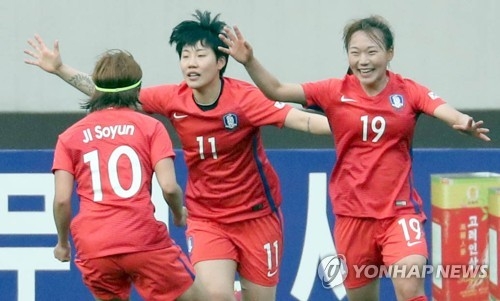 Jang also scored a goal in a 6-0 win over Hong Kong. She now has eight goals in 30 matches for South Korea.

"Previously, when people asked me about the one unforgettable moment of my career, I answered that it's the 2010 U-17 World Cup, where we won the title," she said. "But now, that is going to change. I think scoring goals in Pyongyang will never be forgotten."

Jang is considered one of the future hopes for South Korean women's football. She said the young players have earned good experience by playing matches in Pyongyang.

"I think this qualifying campaign has served as a stepping stone for us to prepare well for the 2019 FIFA World Cup, where I think young players like us should step up," she said. "The players have gained a lot of confidence, but we try not to show off too much of that."

Young forward says she had 'unforgettable' experience in Pyongyang

Young forward says she had 'unforgettable' experience in Pyongyang