(ATTN: RECASTS to RAISE Trump's authorization of bomb use in Afghanistan)
By Chang Jae-soon

WASHINGTON, April 13 (Yonhap) -- U.S. President Donald Trump pledged again Thursday to take care of the problem of North Korea after authorizing the dropping of the largest U.S. non-nuclear bomb in Afghanistan in a move sure to serve as a warning to Pyongyang.

The U.S. military announced that it used the GBU-43B Massive Ordnance Air Blast (MOAB) bomb to strike an Islamic State (IS) tunnel complex. It was the first time that the 21,000-pound bomb, also known as as "Mother Of All Bombs," has been used in battle.

The bombing came as tensions are running high on the Korean Peninsula amid fears that the communist North could go ahead with its sixth nuclear test this weekend to mark the birthday of the North's late founder and grandfather of leader Kim Jong-un.

The U.S. Pacific Command has already redirected a massive aircraft carrier strike group led by USS Carl Vinson to waters off the Korean Peninsula in a show of force aimed at warning Pyongyang against provocations.

Asked if the first use of the massive bomb is designed to send a message to North Korea, Trump said, "I don't know if this sends a message. It doesn't make any difference if it does or not. North Korea is a problem. The problem will be taken care of."

"I think China has really been working very hard. I have really gotten delight and respect, as you know, President Xi is a terrific person. We spent a lot of time together in Florida and he is a very special man. So we'll see how he does. I think he's going to try very hard," Trump said during a White House meeting with first responders.

Earlier in the day, Trump also said he's confident China will rein in the North. 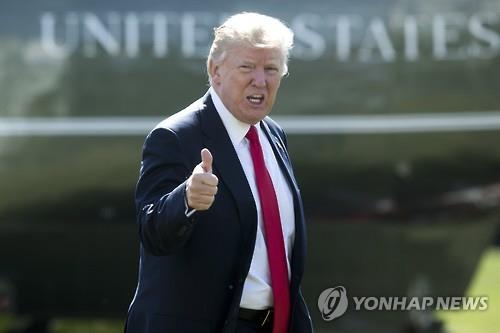